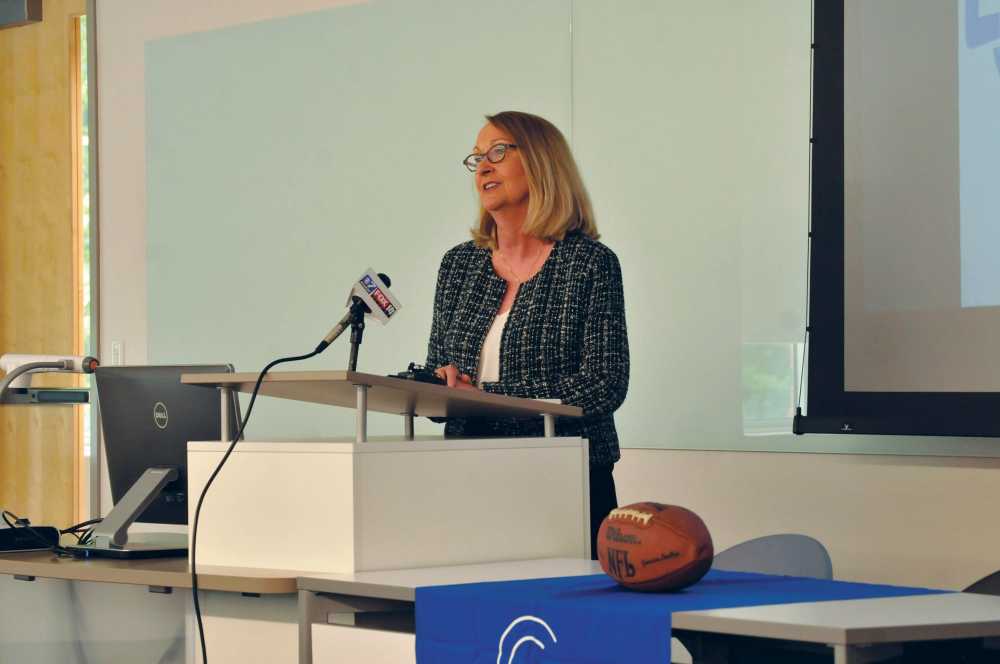 The announcement was made Thursday afternoon at the Rogers Fine Arts Building on the Campus of Cottey College. School President Dr. Jann Weitzel, along with Athletic Director Stephanie Beason, unveiled the newest addition to the athletic department's lineup.

"Cottey College is very excited to announce a new sports opportunity for our students here — flag football," said Weitzel, as she delivered her opening comments to the media-only briefing. "Cottey will be the very first college or university in the state of Missouri, and the very first women's college nationally, to offer this sport. We're very excited to be on the leading edge of this sport, and to give young women from around the country an opportunity to showcase their talents and grow academically."

Weitzel noted that flag football as a college sport is being co-sponsored by the National Football League (NFL) and the National Association of Intercollegiate Athletics (NAIA), of which Cottey College is a member.

Weitzel said the team is set to debut next spring, and will play their home games at Logan Field, home of the Nevada High Tigers. The contests will consist of seven-on-seven competition.

"Adding new sports is a strategic move here at Cottey College," Weitzel said. "We're so excited to be in the forefront of flag football at the collegiate level," she noted.

"We are exceptionally excited to be adding women's flag football, another NAIA-sanctioned event, into our athletic department" Beason, taking the podium after Weitzel, said. "We've been extremely lucky to have the partnership with Nevada High School that we have. In discussion with (NHS AD) John McNeley, he is graciously allowing us to use their football stadium for our home events."

"That will be a great start for us in filling out a schedule," Beason said, adding that the year one slate will likely be comprised of six regular-season games, plus a "final event."

"And then, moving forward, they're hoping to get to a 10-12 game season, and the national event there as well," she said.

Beason further elaborated on the schedule.

"We don't necessarily have a schedule built and set up," she said. "What we're thinking in this first year, with a six-game schedule, is that we'd like to get a couple other teams together, so that we're kind of playing a round-robin. So I would venture to guess that those games would probably be held on Saturday's. Since it's a spring sport, we wouldn't be interfering with any of the high school's football games."

Beason said the field dimensions are 80 yards from goal line-to-goal line — and 40 yards from sideline-to-sideline. "It's obviously smaller than a normal football or soccer field."

Beason then welcomed the program's first head coach to the podium, 2016 Nevada High alum, Madeline Culbertson, who is also an admissions counselor at the school. 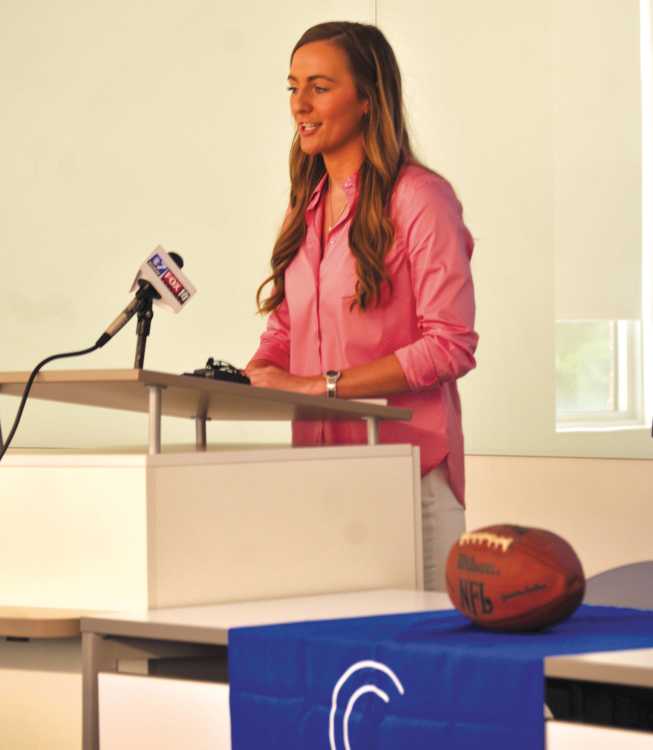 "I'm very excited for this opportunity, and for the recruitment process we have for 2020 applicants," she said. "I'm excited for these young women, and the education they're going to receive."

"We thought it would be a great opportunity for Cottey to be on the frontline of something that would be groundbreaking within the NAIA," Beason said, in response to a question. "I personally think this is probably going to explode almost as much as what Esports has done within the NAIA. This is just something that we really wanted to be a part of."

Beason lauded Weitzel as a "phenomenal supporter of the athletic department as a whole."

"I've been at a couple of other schools where, quite honestly, I never even saw the college president," Beason said. "So to have a college president that's willing to sit in the stands at a softball game, or be in the gym in the bleachers with the rest of the fans, that's been huge for us, and something I know our student-athletes certainly appreciate."

Continued Beason: "We have a lot of excitement running around Cottey right now, with flag football, and also Esports, starting in the fall. Those are two sports that are drastically unique to the sports world right now. It's a great opportunity for us to build and grow something that's new."

Beason confirmed the recruitment process is well underway, and that states such as Florida, Georgia, Nevada, and California have prep-level flag football programs.

Beason said the year-one goal is to recruit 10 to 12 student-athletes for the program. "We will be recruiting from some of those states, and probably do have some student-athletes already on campus that are going to want to flip over to this. But, we have full faith in Madeline, that she will be able to recruit a full team. But we also do have some of our (current) student-athletes as backups as well. Maddie is going to be a great addition for this. She already works in enrollment management, so she has recruitment in her current position. We're excited to have someone that was in-house, that already has a lot of experience with this, that we also have a lot of faith in moving forward with this program."

"I'm really excited to get to work with these young women, and be able to (impart) my experience of playing college athletics, and guide them towards success," she said. "Being able to bring another sport here is just really exciting. A lot of students are able to see how great of a school it is."

Culbertson said she's already spoken with more than 50 prospective student-athletes, adding that five have applied with the school, and an additional five are interested in visiting the campus.

"Our financial aid packages are amazing," she said. "And Cottey students being able to study abroad for free is incredible. Our suites and community, just the camaraderie at Cottey, is great for them to be able to see."