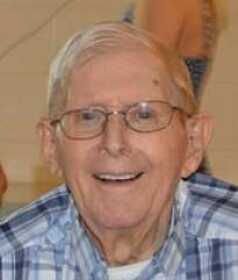 John was born and raised in Moundville. He graduated from Bronaugh High School Class of 1947. He served in the United States Army for two years from 1951-1952 serving in Korea during the Korean Conflict. Following his time in the service he worked at several local grocery stores in Nevada and Moundville including Ashbaugh’s in Moundville, Safeway, Karbe’s, Town & Country and retiring from Woods Grocery in Nevada. He has lived in Nevada for the past 65 years. His hobbies included fishing, woodworking, blackberry picking, pecan picking, playing with his grandchildren and great-grandchildren.

Memorial services for John and Patsy Campbell will be held at 2 p.m., Tuesday, Nov. 17, at Ferry Funeral Home in Nevada with Pastor Roger Beach officiating. Committal will follow in Welborn Cemetery in Moundville. Friends may call now and until the hour of service at the funeral home.

Memorials are suggested in their memory to Welborn Cemetery Association in care of Ferry Funeral Home.