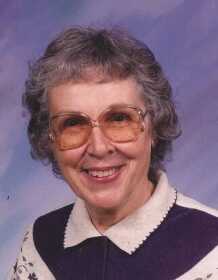 Marian was born on July 16, 1928, in Bloomington, Ind., to Harold and Flora (Poehlein) Young. She lived in several small Indiana towns before moving to Milford in 1935 where she met her future husband in second grade. She graduated from high school in 1946 and then attended Hanover College and Ball State Teacher’s College graduating from Ball State in 1950.

On June 9, 1950, she married Joe Sunthimer in Milford, Ind. They both taught in Indiana for several years and their three children were born during these years.

In 1960, they moved to Tempe, Ariz., where Joe had been awarded a National Science Grant to study at Arizona State for a year. At the end of the year, Marian, Joe and their son, Ed (9), and daughters, Susan (6), and Kathy (2), moved to Nevada, Mo., where Joe had agreed to teach at Cottey College.

Marian taught for 25 years in Nevada. She taught lower elementary grades, 19 of those years in kindergarten.

In 1980, she received the Education Pacesetter Award from the Nevada-Vernon County Chamber of Commerce.

After her retirement in 1990 she substituted for several years. Later she volunteered in kindergarten and first grade as well as the NRMC gift shop. Most recently she had volunteered at the Spirit and Truth Thrift Shop.

Marian and Joe spent their summers traveling with their children. After retirement, they frequented the Boundary Waters, Las Vegas, and Germany to visit their son. They traveled the United States in their RV, including Alaska. Marian also enjoyed rug making, creative writing, and creating family photo albums.

A memorial service will be held at a later date.

Memorials are suggested to Avalon Hospice or the Linking Literacy Program at Benton Elementary School in care of Ferry Funeral Home in Nevada.