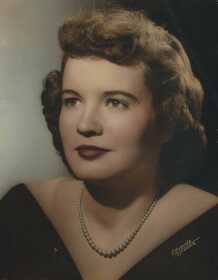 Annette was raised in DeKalb, Ill., and attended school there. She graduated from DeKalb High School in the class of 1949. Bob and Annette came to Nevada, Mo., in 1978 when they purchased the W.F. Norman Company from Franklin Norman. Annette worked at the company until last year. She was a member of Thalias for many years and played in both couples and ladies bridge groups.

Annette is survived by four children, Mark and his wife, Sue, Nevada, Susan Vicory and her husband, Jay, Mound City, Kan., Neal and his wife, Nora, Nevada, and Chris Quitno and her husband, David Carden, Stilwell, Kan.; 10 grandchildren, Tracy, Lauren, Katy, Clare, Elizabeth, Carolyn, Andrew, John, Hannah and Lily; three great-grandchildren, Gabby, Ethan and Miles; and one brother, Louie Male. She was preceded in death by her husband, Bob; her parents, Joseph and Frances; one brother, Joe Male; and one sister, Marge McCabe.

A private graveside service will be held for the family only on Monday, March 8, at Newton Burial Park, in Nevada. Friends may call now and until noon, on Monday at Ferry Funeral Home, Nevada.

In lieu of flowers, the family asks that you make contributions to the Community Outreach, Moss House in Nevada, or Special Olympics in care of Ferry Funeral Home.