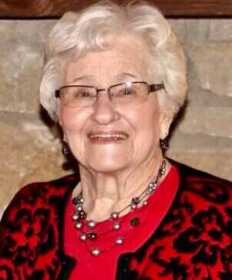 Robena L. (Wise) Rasnic, 98, formerly of Nevada, Mo., peacefully passed away on March 19, 2021, at Friendship Village in Chesterfield, Mo., where she had lived with her late husband, Jack Rasnic, for the past several years. Jack and Robena made many friends at Friendship Village and were fortunate to have family close by during their final years.

Robena was born in rural western Vernon County to parents Vena Belle and Frank O. Wise on July 1, 1922. She spent her childhood and youth on the family farm near Garland, Kan. Growing up during the challenging times of the Great Depression was hard but made easier by the fact her family lived in a close-knit rural community where neighbors helped neighbors, no matter what the task. Robena loved the farm lifestyle and shared many memories over the years. One of her favorites was riding her horse, Buck, to the one room Pleasant View school she attended. As she grew older Robena attended high school in Nevada where she lived and worked at Mrs. O’Neill’s Boarding House. It was during her late high school years where she met her future husband and it soon developed into a lasting relationship that included motorcycle excursions on the weekends. They married on Dec. 4, 1941, three days prior to the attack on Pearl Harbor. In the summer of 1942 her husband, Jack, left for military duty with the U.S. Army and was stationed overseas. During that time Robena shared an apartment on Pine Street with her sister, Geraldine. She briefly worked at Farm and Home Savings but had to quit because of her pregnancy with their first daughter, Karen, who was born in 1942.

After her husband returned from three years overseas, they continued to establish their family in Nevada. Jack resumed working for the Missouri Pacific Railroad while Robena took care of the house and four children. As the children grew older Robena decided to return to the workplace and took a job at the new dress factory in town, Nelly Don. Robena began working as a seamstress on the factory floor but soon was chosen to work in and manage the retail fabric shop located in a separate part of the factory. She enjoyed her career at Nelly Don working with the fabrics and making many friends. After leaving Nelly Don Robena continued her participation in the Business Professional Women’s organization and was celebrated by the Woman of Year Award in 1983. Robena and her family attended the First Baptist Church for many years, participating in and leading many church related activities. In later years Robena was highly active in the Vernon County Historical Society particularly the Bushwhacker Museum. Robena had many friends in Nevada and the surrounding area. During her retirement years Robena and Jack participated in numerous sightseeing trips with friends traveling around the country and different parts of the world. Robena and her husband also spent winter months in Florida which provided her with many pleasant memories to the end of her days.

A graveside service will be held at a date to be announced. Interment will be in Newton Burial Park, in Nevada, Mo. In lieu of flowers donations to the Bushwhacker Museum (212 West Walnut Street No. 2341, Nevada, MO 64772, www.bushwhacker.org) would be appreciated.