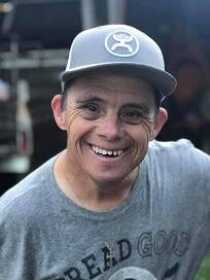 Thomas James (Tommy) Phillips, 55, departed this life to meet Jesus with his secret handshake on Tuesday, March 30, 2021. Tommy, named after his father and Uncle Tom, was born to Romie James and Joan Loraine (Woolverton) Phillips in Nevada, Mo., Feb. 8, 1966. Tommy, also known to some as "Tom Wayne," after his idle John Wayne, and “TaTonka” his Indian name meaning Buffalo, resided in Nevada during his childhood. He later moved to Moundville with his parents to enjoy the country life, driving his chuckwagon and four-wheeler, swimming in the pond, hunting, and checking cattle with family.

Tommy attended school at State School 66 in Nevada where he graduated with his class of 1985. He enjoyed working and being a productive member of society. He loved working at JT Maloney's, and in the summers, working at Cottonwood Cove in Southfork, Colorado at the Campground. He later worked at Quality Products for 15 years, retiring in 1994, along with his parents. After retirement, Tommy and his parents were camp attendants at Stockton Lake. Tommy eagerly accepted the duty as a, self-appointed, Deputy Park Attendant, always wearing his badge. As you can imagine, the opportunity to build on his friendships increased as he visited every camper coming into the parks. He had many opportunities to expand his abilities and experiences. Tommy was dedicated to working out and maintaining his physical strength. He participated in the Special Olympic World Games at Notre Dame, Indiana in gymnastics in 1985 and New Haven, Connecticut to compete in individual bowling competition in 1987. Tommy was elated for various opportunities to do custodial work at Nevada High School and Bronaugh High School. He did a great deal of socializing while "working", but most important was the impact he had on the students, to promote acceptance, understanding and love. Tommy's favorite meal was a "Buffalo Burger and Carmel Frappe" from McDonalds. Yep, they have buffalo!

Tommy was also blessed to possess the gift of proper introductions and social interaction which provided the opportunity for him to build his wealth of friendships which he absolutely treasured. If he met you, he would never forget you and you would never forget him!

A friend of the family shared this message, his thoughts of Tommy: “He sure made me laugh a lot and I loved his self-confidence...He was raised to be that way!! He was not timid and quiet from being held back. Tommy would let a person know what he thought. He had a good life. Your family did Great, Letting Him be Him. We will all miss Tommy. Peace and Love!!”

We would like to encourage all to attend in your most comfortable sport/athletic attire, rodeo/western wear — but please leave your guns at home and mask up!

Funeral services will be held at 10:30 a.m., Saturday, April 3, at Ferry Funeral Home, in Nevada, with the Rev. Kay Zimmer and Kevin McKinley officiating. Private interment will follow in Moore Cemetery in Nevada. The family will receive friends from 5:30 to 7 p.m., Friday, at the funeral home.

In lieu of flowers, the family suggests memorials be made to Scholarships or needs for Bronaugh Schools and the United Methodist Church of Moundville in memory of Tommy.