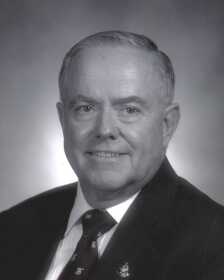 David was raised in Nevada and graduated from Nevada High School Class of 1960. He attended Drury College in Springfield for two years before joining the United States Navy in 1962. David served during the Vietnam Conflict as an electrician stationed in Subic Bay, Philippines, and later aboard the USS Kitty Hawk. Following his honorable discharge in 1966, David served an additional two years in the U.S .Naval Reserves. Upon his return to Missouri, he moved to Springfield and worked at Miller’s Mutual Insurance in Springfield for several years then began employment at AVCO Finance in Springfield. While working at AVCO his career moved him to various locations including Warrensburg, St. Joseph, and Kirksville, Mo., where he later began working at Commerce Bank. In the early 1980’s he returned to Nevada, working first at Citizen’s State Bank and then Farm & Home Savings.

David was a member of the Osage Masonic Lodge No. 303 serving as Past Master in 1986 and in 2006, Scottish Rite, and Abou Ben Adhem Shrine Mosque. He was a member of the First Christian Church in Nevada and was also an active choir member for the Community Council on the Performing Arts. He previously served on the Nevada Planning and Zoning Commission as well as the Nevada Housing Authority Board. David enjoyed music, reading, fishing, debating politics with friends, and keeping up with current news. He was an avid history buff, taking special interest in American History and US Naval History. He loved spending time with his family, especially his grandchildren.

In addition to his wife, Sue, he is survived by one son, Will Bishop (Kristin) and two grandsons, Winston Bishop and Linden Bishop, all of Redfield, Kan.; one brother, Fred Bishop (Pam), Phoenix, Ariz.; and numerous nieces and nephews. He was preceded in death by his parents and brothers, Robert Dean Bishop, and Tom Bishop.

Masonic services were scheduled at 7 p.m., Monday, April 26, at Ferry Funeral Home in Nevada with visitation to follow until 8:30 p.m.

Funeral services will be held at 10:30 a.m., Tuesday, April 27, at Ferry Funeral Home in Nevada with Pastor Bill Platt officiating. Interment with Military Honors will follow at 12:30 in the National Cemetery in Fort Scott, Kan.

Memorials are suggested in his memory to the American Diabetes Association in care of Ferry Funeral Home.