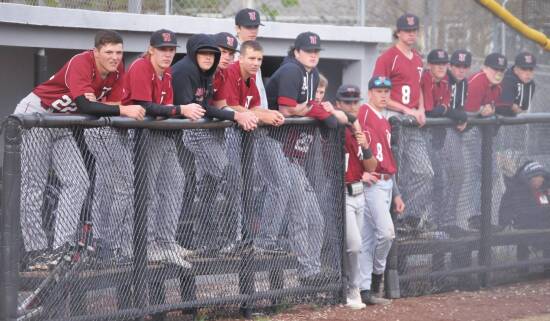 Members of the Nevada High School baseball team watch a pitch from the dugout during a home game earlier this month at Lyons Stadium.
File Photo by Hank Layton | Daily Mail Sports Reporter

Where did the Nevada High School baseball team play on Monday, and would the Tigers come away victorious?

In fact, there was little mystery early as to how this one would turn out, with NHS putting up eight runs in the opening frame and combining to no-hit the Marksmen in a three-inning run-ruled blowout, 19-0.

Nevada sophomore Case Sanderson led the way, pitching one of those hitless innings and hitting a grand slam and a double as part of his 2-for-3 day at the plate.

Freshman Riddick Shook and senior Lane Wilson tossed the other two no-hit innings, with the latter striking out all three batters he faced.

The Tigers were held scoreless in the second inning before plating 11 in the third.

"We did a good job of staying focused throughout the game, not playing down to a lesser-talented team," NHS head coach Danny Penn stated afterward. "I was proud of the leadership some of our guys took upon themselves and how they made sure everyone was in the game and ready until the final out was recorded."