Tigers tennis tunes up with win over Clinton 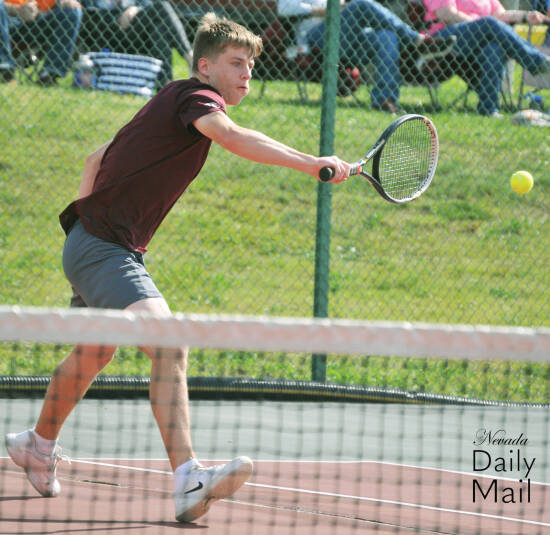 If the Nevada High School boys tennis team was lacking any confidence heading into its conference and district tournaments later this week, Monday’s home dual against Clinton may have provided the boost the Tigers needed.

Nevada picked up its second team win of the season with a 9-0 sweep over the Cardinals, ending its regular season on a high note before heading to the Big 8 Conference tournament Wednesday in Springfield.

“Felt good today, but conference will be a lot tougher than this,” said junior no. 1 singles and doubles player Evan Rea, who won both of his matches without losing a game, or for that matter getting into many rallies longer than three or four shots. “I felt confident with my first serve. That’s what I’ve been working on a lot. We didn’t get many rallies going, so it’s kind of tough to see how my forehand was working.”

Playing alongside fellow junior Andrew La Near, Rea first demonstrated his dominant serve in the duo’s 8-0 win over Trenton Hilty and Ryan Trumble — winning the first game on an ace before forcing Hilty and Trumble to hit most of their returns long, short, or wide.

In their no. 1 singles match, Hilty managed to win just three points against Rea, all three of which were unforced errors on Rea’s part. Rea finished with three aces, a few forehand winners, a couple of backhand winners, and one emphatic volley smash in the third game.

“Evan did what he does, just took care of business,” said NHS head coach Clayton Wheeler, who credited Rea for staying focused while Hilty took upwards of 20 seconds before every serve dribbling the tennis ball — a skill Rea may have honed at Logan-Rogersville last week when he came back from a four-game deficit to win. “He seemed to focus a little bit more. He goes full bore the whole time, so it wasn’t necessarily an effort thing. It was a focus and a determination. Getting his head back in the game, getting refocused, and playing his tennis.”

Whatever it was, it must have rubbed off on the rest of the Tigers — none of whom allowed an opponent from Clinton to win more than four games.

La Near won his no. 2 singles match over Trumble, 8-2; Chosen Reichard beat Isaiah Conway 8-3 in no. 3 singles; Jaden Theis in no. 4 singles picked up his first win of the season with an 8-3 victory over Abraham Griffey; Jamin Mosher beat Dylan Coskey 8-3 in no. 5 singles; and in no. 5 singles, Trey Streeter followed up his first victory of the season last week with another one Monday, 8-4 over Liam Ross.

In no. 2 doubles, Reichard and Theis topped Conway and Griffey 8-1, and in no. 3 doubles, Mosher and Streeter shut out Coskey and Ross 8-0.

As for Rea, he is now 12-1 on the season and will get his shot to avenge that lone loss Wednesday should he advance far enough in the Big 8 Conference tournament to face Springfield Catholic’s Morgan McLain.

“I’ve been waiting to play Catholic a while now. But the good thing about conference is, it’s not the end of the year if you lose,” said Rea, who will start playing with the season on the line Friday at the Class 1 District 12 tournament in Bolivar.