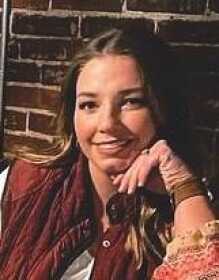 Laney Amber (Metcalf Wilkins) Miller, 29, Nevada, MO went to be with her Lord and Savior on Thursday, May 6th, 2021. Laney was born in El Dorado Springs, MO on March 8, 1992 to Lisa Wilkins and John F. Metcalf.

When Laney was six months old her father passed away. In September of 1995, her mom married Monty W. Koehn and Laney quickly became HIS little angel. She loved to dance and sing and often attended Karaoke with her parents. She performed her first solo at the Eagles Aerie at the age of 4, and although she was horribly tone deaf, she was a huge hit with the crowd and quickly wormed her way into the hearts of many. At the age of 12, Laney moved to Nevada and started attending the Nevada Schools. She shot her first deer at the age of 13 and became an avid hunter. She especially loved going with the “old men” on goose and duck hunts. Laney graduated from Nevada High School in May of 2010. She went to work as a cashier for Wood’s Supermarket and worked her way up to supervisor roles and bookkeeper. It was during this time that she reacquainted with Stormy Miller and together they ended up having three children, Koeyn Blaine, Transyn Blaine, and Adalie Rayne. They married on February 3, 2020.

Over the years Laney worked at the US Bank Mortgage in Nevada, Sharky’s in Ft. Scott and in Nevada, was an in-home aide for the State o Missouri, and after several years at home with her children, she recently started a home cleaning business. After only a couple of months she was booked solid, ready to hire help due to her dedication and attention to detail. Laney’s main focus in life was her nieces and nephews in whom she was especially close to.

Memorials are suggested to a scholarship fun for her children c/o Ferry d Home.

*** Those in attendance will be asked to maintain social distancing and are asked to wear face masks to protect themselves and others.