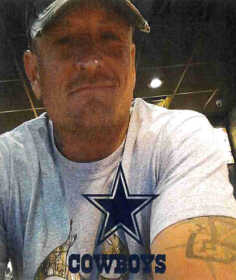 He was preceded in death by his brother, Stanley Wayne and father, Gordon Henry Kranz. He is survived by his mother, Lulu Kranz; his children, Dillon, Georgia, and Jakoda; two brothers, Gordon "Jimmy" and Jerry; two sisters, Pam and Cherie; two brothers-in-law, Bob and Kenny; two sisters-in-law, Robin and Rose; and many aunts, uncles, cousins, nieces, nephews, and friends.

Charlie grew up in Rockwall, Texas, lived in California a few years, traveling the U.S. with his brother, Jimmy, and sister-in-law, Robin. He returned to Texas for four years, then moved to Nevada, Mo., in 2001. He spent the last 21 months in Hockley, Texas.

For most of his adult life, he worked at Murphy Farms in Lamar, Mo., and did construction/steel work. He loved his children, family, and the Lord with all his heart, and was a proud Dallas Cowboys fan. He will be dearly missed.

Arrangements are pending. Burial will be in Delphos, Kan. In lieu of flowers, donations can be made via Venmo to @Cherie-Brown22, to help the family with expenses.