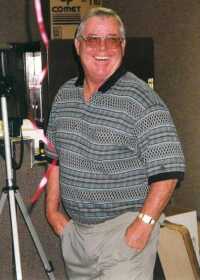 After graduating from Walker High School in 1954 Dick went to work at Sac-Osage Electrical Cooperative for about 33 years, retiring in 1987.

As a young person Dick loved playing baseball. He played for the Stockton Walnuts winning the state tournament at least two times. He later shifted to softball and spent many happy years playing ball on the Verco Sporting Goods team. After giving up softball he shifted to a much smaller ball and took up golf. He loved going out to play in the Senior Golf League at the Nevada course. Most days you could find him out on the course from sunup to sun down. Dick loved spending time with his children, grandchildren, and great-grandchildren and watching their activities. In the last few years he has joined a group of friends for coffee each week and that group of men have had deep conversations, solved world issues, and just enjoyed each other’s company. The group made up of John Ogle, Tommy Freeman, Bob Beaver, Delton Fast, Ron Chandler, and Dyke Keil all held a very special place in his heart. He will be remembered as someone who loved with all his heart and was always ready for an adventure.

He was preceded in death by his parents, Howard and Angie Hacker; four brothers, Bob, Jim, Bill, and Tom Hacker; and two sisters, Sue McDaniel and Bonnie McDaniel.