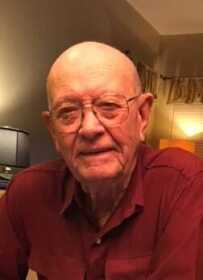 Ronald Lawrence Hoffman, devoted husband, father, and grandfather, age 91, passed away while asleep on the evening of Wednesday, May 19, 2021. Ronald simply went to bed, pulled the covers up and went to sleep. Ronald, a resident of Alaska, was house sitting in Phoenix, Ariz., for his son and daughter-in-law.

Ronald was born July 8, 1929, on a little farm, just west of Tiffin, Mo., to George Lawrence Hoffman and Bernice Loree Downs Hoffman. He grew up on farms in the El Dorado Springs and Stockton, Mo., areas where he attended a one-room country school through the eighth grade in Cedar County. Ron graduated from High School in El Dorado Springs, Mo., in 1947. He then entered the US Navy in 1948 and in 1951 he switched and re-entered military service for the US Air Force. Ronald retired with over 22 years of service in 1970 as a Senior Chief Master Sergeant.

Ronald married Pearl Louise Shaffer on May 26, 1951, and was married for 66 years. Pearl passed away Aug. 25, 2017. Ron and Pearl were devoted to each other, military service, and traveling, living in many places during the 20 years of US Air Force service and ultimately entering civilian life in Anchorage, Alaska. Ron and Pearl sold their home in Anchorage in 1975, moving back to Nevada, Mo., to be closer to their mothers and assist them as they grew older.

Ron and Pearl built a home on a farm near their roots in Nevada, Mo. They found jobs in town at the Fram Corporation, and both retired from there. They sold their farm in 1996 and moved into the town of Nevada, Mo. Then a life of fun started when they purchased the first of several RV’s. They traveled to most of the lower 48 states, plus Alaska. Their favorite states were Alaska, Washington, Montana, and Missouri in the summer, Arizona in the winter.

Ronald was converted and joined the Pace Town Pleasant Ridge Baptist church in August 1942. Later, Ronald and Pearl were devoted members of the Pape Christian Church just outside Tiffin, Mo., close to where Ron was born. Ron and Pearl said they always felt like they were going home at the Pape Church and they considered the people at Pape their family.

There is no death on earth that soothes the pain of losing someone dear to them without a tear. Ronald will greatly be missed.

Funeral services will be held at 1:30 p.m., Tuesday, June 1, at Ferry Funeral Home, in Nevada, with Brother Dennis Wallen officiating. Interment with Military Honors will follow in the El Dorado Springs City Cemetery. Friends may call now and until the hour of service at Ferry Funeral Home.