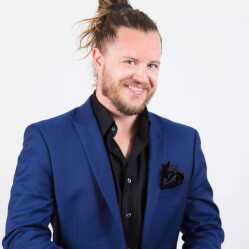 Chris was born in Nuremberg, Germany, to Audra and Roland on June 30, 1987. Chris finally landed in Utah where he lived for the rest of his life.

Chris has three sisters: Amber, Lizzie and Jada Austin. He loved his sisters very much.

He attended Hillsdale Elementary. There is a tree planted with a plaque in his honor for having 100 percent perfect attendance for eight years. He made the wrestling team, baseball team and football team throughout the years, as well as social dance performance team with one of his best friends, Charmaine. They also did gymnastics together with 4.0 GPAs.

In the yearbook, Chris and Charmaine were voted “Biggest Flirts” Chris was voted “most popular” in high school as well as “most likely to become a Super Model.”

Charmaine Gallegos was his first true love, his soulmate. Sadly, towards the end of his life they found each other again in October 2018. They were in sync in every way. Their synchronicity would become serendipitous. They were such lovebirds, very present with each other. As romantic as they were, because they love to dance, they would often slow dance in the middle of the kitchen or in the middle of the sidewalk and get lost in each other.

He ended his journey doing contract work with a flight school in Provo, Utah, while he was starting a new mobile aircraft maintenance idea.

Chris previously had gone on multiple scuba diving trips all over the world, from St. Thomas, Virgin Islands, Antigua, Cuba to Mexico. He loved to travel, dance, wine and dine. He taught a breakdancing routine to a group of Nigerian refugee teenagers and they performed for Jackie Chan at The Leonardo Museum in 2019. His love of dance is what kept him happy, confident and it expressed his creative love for life!

Chris found himself while in Peru during a very trying time in his life. By honoring this incredible point of self-exploration, Charmaine and his mom Audi will travel to Peru to scatter the rest of Christopher Lee Austin’s remains.

I will see you on my radar...Christopher Lee Austin.

A Go-Fund-Me account on Facebook has been created to help pay for Chris’ funeral services and help take his ashes to Peru. Thank you for any contributions. Unfortunately, there was no life insurance policy in place, so anything would be appreciated. (https://gofund.me/2d0ce19d).