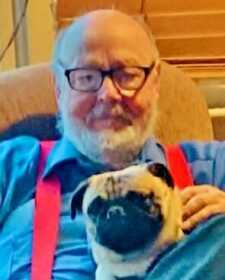 Robert Henry Henley of Kansas City, Mo., slipped peacefully into the Lord’s embrace on May 21, 2021.

Robert (Bob) was born May 22, 1945, in Nevada, Mo. He was the delight of awaiting parents, Thelmo Robert Henley and Anna Catherine Leveling Henley, and older sister Catherine. The family continued to grow resulting in siblings Mary and James. Bob impressed his family with his academic prowess, skill with carpentry, work ethic and ability to inspire others. He joined the Air Force after graduating from Metz High School in 1963. He was hoping to see the world, but after four years of stateside service decided to pursue a career with the Xerox Corporation which continued until his retirement several years ago.

Bob was not content to be a man of leisure, so he began another passion to renovate houses. He loved restoring older, historic homes and was incredible with his carpentry skills in recreating missing wood trim. With his experience in the Air Force and Xerox, he never met an electrical challenge he couldn’t conquer! He was the go-to guy for many friends and family. Bob was united in marriage to Opal Kay Shouse Henley in 1969. They were blessed with a son, Adam Robert Henley. Adam continued to be the pride and joy of his parents, excelling in academics, receiving scholarships, and graduating from Boston College.

Bob was preceded in death by his parents, Thelmo Robert Henley and Anna Catherine Leveling Henley; older sister, Catherine Henley Weatherman; as well as many aunts and uncles. He is survived by his son, Adam Henley of London, England; sister, Mary Miller of Butler, Mo.; brother and sister-in-law, James and Beverly Henley of Nashville, Tenn.; treasured aunt, Frances Radice of Chicago, Ill.; as well as many cousins, nieces, and nephews.

Bob will be greatly missed by many treasured friends. He was a precious gift to all who really knew him.

A graveside service was held at Leavenworth, Kan., National Cemetery on Friday, May 28, at 11 a.m. Family and friends gathered at the main office of the cemetery at 150 Muncie Road, Leavenworth, KS 66048.

In lieu of flowers, the family requests donations be made in Bob’s name to the American Cancer Society or a local pet charity of your choice.

Condolences may be offered at www.passantinobros.com.