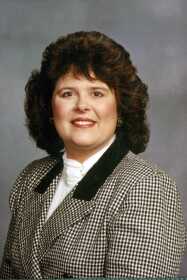 Jan Ellen Tate, 66, a resident of Fort Scott, Kan., passed away Saturday, May 29, 2021, at the Via Christi Hospital in Pittsburg, Kan. She was born April 2, 1955, in Fort Scott, the daughter of Lewis Allen Dare and Virginia Bolinger Dare.

Jan was raised on the family farm where she learned to love the land and country living. She also grew up attending the Mt. Orum Baptist Church south of Redfield, Kan., where she learned the love of God and her Savior, Jesus Christ. She graduated from the Uniontown High School and later went on graduate from Pittsburg State University with a degree in business management.

She married Kelly Tate on July 20, 1973, at the Mt. Orum Church. In earlier years, Jan worked at Montgomery Ward and the Western Insurance Company. She also worked as a pre-need funeral counselor for Cheney Witt Chapel and as a bookkeeper for Ray Shepherd Motors.

Jan later began a career with American Family Insurance. She worked for a time with the Ed Graham agency in Fort Scott and later moved to her own agency in Nevada, Mo., where she remained active with the business until the time of her death.

Jan will be remembered for her outgoing and cheerful personality. She enjoyed singing, playing cards and attending her grandchildren’s activities. She was a member of the Community Christian Church.

Survivors include her husband, Kelly, of the home; two daughters, Janelle Tate of Uniontown, Kan., and Jennifer Hymer (Charlie), of Fort Scott; and three grandchildren, Bryden, Bryleigh, and Kyndal. Also surviving are a brother, David Dare (Martha), of Uniontown, Kan.; a sister, Kathy Endicott (Garry) of Trafford, Ala.; and a sister-in-law, Mary Brownback (Loyd), of Mound City, Kan. She was preceded in death by her parents; and a brother, Max Dare.

Funeral services will be held at 10:30 a.m., Thursday, June 3, at the Community Christian Church. Burial will follow in the Uniontown Cemetery. The family will receive friends from 5 to 7 p.m., Wednesday, at the Cheney Witt Chapel. Memorials are suggested to the Community Christian Church and may be left in care of the Cheney Witt Chapel, 201 S. Main, P.O. Box 347, Fort Scott, KS 66701.