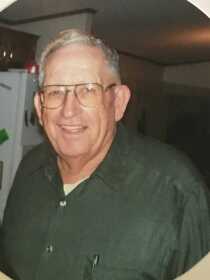 Roy Parkison Jr. passed away on July 23, 2021, at Nevada Medical Lodges after a lengthy battle with cancer. Roy was born on Dec. 14, 1936, in Harwood, Mo., to Roy Snow and Irene Parkinson. He graduated from Schell City High School in 1955.

Upon graduation, Roy worked for a short while in Wichita welding at the Coleman Furnace Company. For the following 28 years Roy worked as a construction foreman at Jeffries and Schaller Construction Companies. Roy was wed to Eunice Cotton in April 1958. To this union three children were born: Becky, Ricky, and Timothy.

Roy was preceded in death by his wife Eunice in 1978. Roy remarried in June 1979 to Della (Larson) Wooderson. Shortly after they were married, Roy took a job at the Missouri Highway Department where he retired in 1999. Roy was a member of the Coal Hill Community of Christ Church. In his younger days Roy liked to race cars and ride and race motorcycles. Roy loved to garden, hunt, and fish with friends and family.

Roy’s garden skills yielded his family, neighbors, even restaurants and grocery stores with produce. Roy’s grandchildren were his pride and joy and he often included them in his meal time prayers. Roy and Della were known for spoiling the grandkids with four wheeler rides, sledding, flying kites at Easter, playing cards, board games, and feeding the fish in the farm pond. Roy and Della were always there for their grandkids and filled in by taking them to ballgames and even to get their drivers license if necessary.

Roy had a caring heart and would do anything to help others thus he was known and loved by all.

Roy is survived by his sister, Linda Harding (Zane) of Boynton, Okla.; his daughter, Becky Landers (Tom) of Dadeville, Mo.; son, Michael Wooderson of Lake Lotawana; and daughter, Michelle Englebrecht (Dennis) of Nevada, Mo. Surviving grandchildren include Jason (Leslie) Cunningham and son, Dalton, of Willard, Mo., Brandon Landers and partner, Brennan, of Springfield, Mo., and Delnelle (Justin) Carroll of Nevada, Mo. Roy is also survived by one sister-in-law and one brother-in-law, Marianna and Jack Cotton of Nevada, Mo. He leaves behind a host of cousins, nieces, nephews, and many friends.