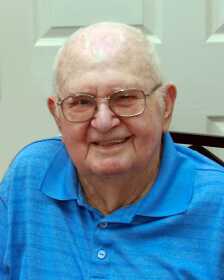 Reverend William Elmore (Bill) Bell, 96, formerly of Nevada, Mo., went to his heavenly home Saturday, Sept. 4, 2021. He was a resident of Gran Villas Pittsburg, Assisted Living, Pittsburg, Kan. He lived most of his adult life in the Nevada and Bronaugh area.

Bill was born Dec. 6, 1924, in a single room log cabin near Booneville, Ark., to Finis Eston Bell and Mary Francis (Elmore) Bell. He was one of four children, two brothers and one sister. On Aug. 8, 1948, Bill married Patricia Ann (Pat) Coleman. In 2018 they celebrated 70 years of marriage.

Bill graduated eighth grade in 1940 at Mixon Community School of Logan County near Booneville, Ark. After completing his time in the military, he earned his GED and went on to earn an AA degree at Southwest Baptist College in 1950. In 1959 he earned a BA degree from William Jewell College in Kansas City, Mo. He later earned his teaching certificate through Kansas State Teacher’s College (now Pittsburg State University).

Bill was drafted into the U.S. Marine Corp and placed into active service Nov. 22, 1943. He completed his basic training in Camp Elliot, San Diego, Calif. He was a Private First Class, member of the Twelfth Anti-aircraft Artillery Battalion Fleet Marine Force, 1098th Platoon, Heavy Anti-Aircraft Gun Crew 601. He deployed to the Pacific Theater on the USS President Polk where he served in the South Pacific, on the Islands of, New Caldonia, Guadalcanal, Guam and Pilly Lou. He was returned to the U.S. on the USS Wharton and was honorably discharged on April 4, 1946, at Camp LeJeume, N.C.

On Aug. 31, Bill was honored, as a World War II veteran, by Dream Flight Freedom 2021, Operation September. Bill was unable to attend the ceremony so, on his behalf, his family accepted a jacket and hat from Freedom Flight and an honor quilt, from the Little Balkans Quilt Guild. His name was also added to the tail rudder of the 1943 Boeing Stearman bi-plane.

Bill was ordained in the Baptist faith in 1955. In 1953, Bill began his ministry at the Grand River Baptist Church. He continued his ministry in other Missouri Baptist churches, including Pleasant View (Liberal) Pleasant View (Vernon County), Bronaugh and Montevallo. Though a pastor never really retires from the ministry, Bill retired from full time ministry while at Deerfield Baptist Church in 2000. During Bill’s ministry years, he also taught at area schools. Beginning in 1955 he taught in Moundville, Metz, Gashland, Bronaugh, Liberal and Nevada, Mo., public schools. He retired from the Nevada State Hospital in 1990.

Bill was an avid reader, gardener, and enjoyed working in his yard. He enjoyed going to all the grandkids sports and school activities with his beloved, Pat. He was a real prayer warrior for his church family, his children, grandchildren, and great grandchildren.

The funeral will be 10 a.m., Saturday, Sept. 11, at the Nevada First Baptist Church with burial to follow in Newton Burial Park with Military Honors.

The family will receive friends from 6 to 7 p.m., Friday, at Ferry Funeral Home.

In lieu of flowers, the family requests memorials be sent to Watered Gardens (Joplin, Mo.) or St. Jude’s Children’s Hospital with the funeral home serving as custodian.