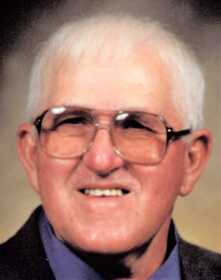 Mr. Lockwood was born on July 8, 1937, at Godfrey, Kan., the son of George F. and Mildred G. Church Lockwood. He grew up on a farm at Godfrey, Kan., and continued to farm with his father. He had a horse he loved named Brownie. He graduated from Godfrey Grade School, Fort Scott High School, and later Fort Scott Community Junior College. He began a career with the U.S. Postal Service in Fort Scott in 1962 and retired in July 1992.

On July 3, 1982, he married Norma Grigsby at the Arma United Methodist Church. Between them they had three daughters and one son. He was active in the Arma United Methodist Church where he was the choir director. He was instrumental in starting the Community Christmas Cantata with the proceeds going to local families in need. He was a volunteer Fire Fighter for the Arma City Fire Department and the Crawford County Rural Fire District No. 2.

Murray enjoyed riding his motorcycle, singing, and working with his cattle. (They all had names of course.). He was given a turkey and with his kind heart he raised the turkey and named him Maynard. The turkey was pardoned on Thanksgiving. There was a news article in the Morning Sun and was interviewed on the evening news. For many years he had a large garden which he shared with all. He enjoyed performing with his niece Sandy Hemphill and her husband Jack Hemphill at Down Home Country Theater. The group was called Family and Friends.

Survivors include his wife, Norma, of the home; children, Cheryl (Dale) Parsons, Dale (Lauri) Lockwood, Lisa (Rob) Kaelin, and Sonya Drevdahl. He was preceded in death by his parents, George and Mildred Lockwood; and two sisters, Maxine Kinney Smith and Carol Thompson.

The family suggests memorials to the Arma United Methodist Church in Arma. Donations may be sent to or left at the Bedene Funeral Home, 517 E. Washington, Box 621, Arma, KS 66712.