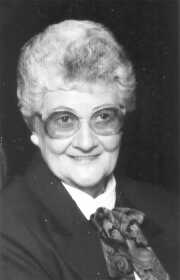 On Nov. 24, 1942, she was united in marriage to John Edgar Sherman and to this union three daughters and one son were born: Toni Kay, Thelma Rae, Rita Mae, and Jack Evan. Even though she had never been out of Cedar County prior to her marriage, she traveled across the United States living in Missouri, Georgia, Nebraska, Oklahoma, Mississippi, and Colorado plus Italy and Germany following John’s 20 year career in military service. They returned to Kansas and Missouri to farm two different farms. After retiring from farming they moved to Nevada, Missouri and lived there until John’s death in November 2003 after 61 years of marriage. Ruby then moved to Ottawa, Kan., to be near her daughter Rita. In 2016, Ruby moved to the Wellsville Retirement Community and lived there the rest of her life.

Ruby was preceded in death by her parents, eleven siblings, and one grandson, William John Sherman.

Funeral services for Ruby Sherman will be held on Thursday, Oct. 28, at 3 p.m., at Bland-Hackleman Funeral Home with burial to follow at Mt. Pleasant Cemetery. The family with receive visitors one hour before the service.