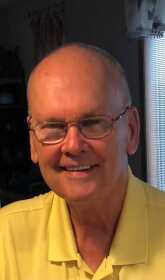 At 17, Gordon enlisted in the United States Marine Corp where he served our county until 1967. In 1965, Gordon married Dana Swope and they were married until her passing in 2016. Gordon began working in the trucking industry in Labor Relations and did so until his retirement.

In 2019, Gordon married Betty Stutesman and they lived in Nevada, Mo., until his passing. He was an avid card player and loved to travel and liked to spend time with his family and friends playing numerous card games.

Gordon was a Brother in Friendship Lodge 89 in Chillicothe, Mo., and was also a member of the Scottish Rite and The Shrine. Those who knew Gordon knew how big his heart was and that he would always be there to help.

Gordon was preceded in death by his parents; brother, Jim; and daughter, Myrna. He is survived by his wife, Betty, of Nevada; son, Blake and wife, Debra, of Arkansas; brother, Barry Atkinson of Colorado; and grandchildren, Taylor and Andrew Ringberg, Curtis and Alissa Stutesman.

Services will be on Dec. 11, at the Nevada Methodist Church in Nevada, Mo., at 11 a.m. In lieu of flowers, the family asks that donations be made in Gordon's name to your favorite charity.