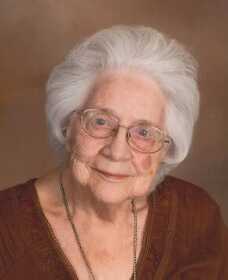 Betty Seitz, 94, Nevada, Mo., passed away on Thursday, Dec. 9, 2021, at her home, in Nevada. Betty was born Jan. 13, 1927, in Nevada, to Jordan Murray and Cynthia Jane (Williams) Claiborne. She was the last of a generation of the extended Claiborne Family to have lived through both the Great Depression and World War II.

Betty was raised in Nevada. She graduated from Nevada High School and later Southwest Baptist College in Bolivar, Mo. Betty also attended Oklahoma Baptist University in Shawnee, Okla., and went on a mission with the Southern Baptist Concession to the Native Americans in Oklahoma.

In April of 1956 she was united in marriage to Gerald George Seitz. They had a family joke every year when April came around as Betty was married on the 8th and Gerald always said it was the 9th of April. Betty was the organist for Pine Street Baptist Church, in Nevada, for decades where she was the longest standing member in all of its history. She was employed at Key Industries in Nevada where she retired after many years. Betty’s life was centered on her family and her faith in Jesus Christ.

Betty is preceded in death by her parents; husband, Gerald; son, Daniel Clay; and a daughter, Peggy Sue. She is survived by her daughter, Nancy Jo Seitz; daughter-in-law, JoAnn Seitz; numerous grandchildren; several nephews, nieces, and family friends. Betty Seitz will be remembered by all as a most loving, kind, and stalwart Christian.

Special thanks to Charlotte Morris and Karan Osmond.

Funeral services will be held at 11 a.m., Monday, Dec. 13, at Ferry Funeral Home, in Nevada, with Pastor Chad Bailey officiating. Interment will follow in Greenlawn Cemetery in Rich Hill, Mo. The family will receive friends from 10 to 11 a.m., prior to the service.

Memorials are suggested to Pine Street Baptist Church, in Nevada, in care of Ferry Funeral Home.