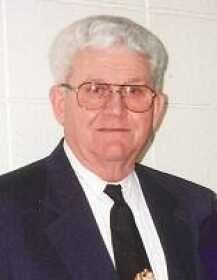 Thomas was the seventh child born to Thomas Francis and Hattie Mable (Dixon) Pyle on May 14, 1928, in Nevada, Mo.

He spent his entire life in Nevada, with the exception of two years that he spent serving in the Army as a Corporal in the Military Police, serving in the Panama Canal Zone during the Korean War.

At the age of 15, he started work at Maxwell Brothers Store picking chickens. The Maxwell family taught him the meat cutting trade and he was a butcher there for many years. Tom left Maxwell Brothers for a job at the Nevada State Hospital where he worked for 35 years, retiring as Food Service Manager.

Tom and his brother Claude played on the Red Sox ball team at the State Hospital from 1947 to 1957. He was a fierce outfielder and loved the sport. Tom was an avid hunter of quail, deer and turkey in the area and was known for his well-trained birddogs. He operated Tom Pyle Kennels for many years and likely kept the dogs of most everyone in Nevada at one time or another. He also raised greyhounds with his brother Claude and made numerous trips to Florida to deliver the dogs to their owners for racing at the tracks.

Tom was a lifelong democrat and was the Chairman of the Vernon County Democratic Committee for many years. Tom served on the Silver Haired Legislature for the State of Missouri during the 1980s and 1990s advancing through the ranks to serve as the President for a term. He treasured his numerous contacts in our State and National legislature with non-biased respect.

Tom was raised in the RLDS church — now Community of Christ — and was an ordained member of the priesthood. He remained active until his health would no longer allow him to attend services. His faith in Christ reached across many denominations through his involvement with the Nevada Ministerial Alliance and also as a chaplain at Nevada Regional Medical Center.

Tom married the love of his life, Virginia Boughton, on Dec. 28, 1947, and they were married 74 years. To this union was born one daughter, Kathy Burkhardt who resides in Lakeland, Fla.

He was preceded in death by his parents, Frank and Mable Pyle; brothers, Herbert Pyle, Claude Pyle, and Jim Pyle; and sisters, Bertha Current, Gladys Banks, and Lela Porter.

Funeral services with military honors will be held at 10 a.m., Thursday, Jan. 6, at Ferry Funeral Home, in Nevada, with Elder Bill Garwood officiating. Interment will follow in Newton Burial Park, Nevada. The family will receive friends from 5 to 6 p.m., Wednesday, at the funeral home.

Memorials may be made to the Community of Christ Church, Nevada in care of Ferry Funeral Home.