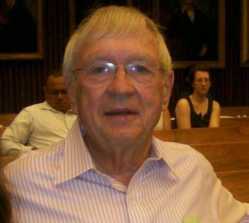 Dr. Louis Dale Lowry, 84, formerly of Richards and Moundville, Mo., passed away Sunday, December 26, 2021, at Meadowood Senior Living in Lansdale. He was the beloved husband to Judith M. Lowry.

Born March 1, 1937, in Fort Scott, Kan., he was a son of tenant farmers, the late Benjamin Louis and Ruth (Tapp) Lowry. He grew up with his sister Nancy and his brother Don.

After graduating from Nevada High School, Dale (as his friends and family knew him), worked his way through an undergraduate degree in chemistry, graduating at the University of Missouri Columbia in 1958.

Dale was awarded a Navy ROTC scholarship for the University of Missouri School of Medicine at Columbia. He married Judith McCormick of Peoria, Illinois, in 1959 while in medical school. After graduating from medical school, in 1962, Dale was accepted to be a Navy flight surgeon but served on the nuclear submarines USS Patrick Henry (SSBN-599), USS Casimir Pulaski (SSBN-633) as well as the submarine tender USS Canopus (AS-34). For his service to his country, he received the National Defense Service Medal.

In 1967, Dale left the military with the rank of Lt. Cmdr. and went to Chicago for a residency at the University of Chicago to become an ear, nose, and throat surgeon.

Dale served the medical field at the University of Oklahoma Health Sciences Center, the University of Pennsylvania and Thomas Jefferson University in Philadelphia, Penn., in 1980 and later became the chairman of the Department of Otolaryngology where he stayed until he retired.

In recent years, Dale developed relationships with the local sawmills who supplied Dale with fine and exotic woods for himself and the other woodshop members at the retirement community. He made this wood into furniture, clocks of all sizes, and many smaller items. He was an active gardener who was generous with his fresh tomatoes. He particularly enjoyed his fishing trips to Alaska and other places with his son James and brother Don.

In addition to his wife, he is survived by his children, Bradley, James, Benjamin, Troy, and Juliana; as well as his sister, Nancy Normand; his brother, Don; as well as his grandchildren, Joshua, James B., Samantha, Andrew, Erica, Philip, Alexander, and Abigail.

Services will be held privately for the family. In lieu of flowers, contributions should be made in his memory to the Monel Center https://monell.org/support/.

Online condolences may be made to the family at www.RLWilliamsFuneralHome.com.