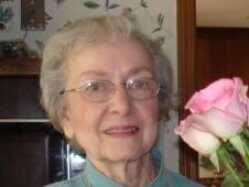 Pauline “Polly” Marie Pritchard, at the age of 97, passed away peacefully Dec. 20,2021. She was born on Jan. 12, 1924, in Ellsworth, Kan., to Frank and Edith Kafka. She was named after her grandmothers Marie Kafka and Pauline Socha (who also like to be called Polly).

She was preceded in death by her husband of 73 years, Jack Pritchard; her older sister, Dorothy Moak; younger sister, Bernadine Lane; and younger brother, Eugene Kafka. Polly and her three siblings were raised in Ellsworth, Kan., along with Kafka family members who immigrated from Bohemia, Austria (now part of the Czech Republic) in the late 19th and 20th centuries. At age 16 she completed High School, and in 1947 worked as a model and later at Graybar Electronic Co. in Kansas City.

Polly helped support Jack’s career through Law school in Columbia, Mo. And later campaigned relentlessly with him for Circuit Judge in Nevada, Mo., planning sessions, rallies, and parades. They had their first home in Nevada, Mo., and had always thought of it as home and continued to have ties there throughout their life, with best friends and Polly’s involvement as a 50 year committee member of the PEO-Sisterhood for Cottey College, Nevada, Mo.

Her husband’s career took them to Jefferson City, Mo., and eventually to Kansas City, where Polly further supported his career as a Judge on the Missouri Court of Appeals, and where they would permanently reside. They became members of the St. John’s UMC in Kansas City where Polly participated in the antique sales and bake sales.

Beloved by all who knew her. Polly will be remembered for her devotion to her family and friends, and often stepped up to care for others in need without hesitation or the need for accolades. Her son’s fondest memories are of being given a wonderful childhood with many activities, like swimming, little league, and cooking together. He feels like he couldn’t have had a better mother. She loved the twice weekly talks with her sister (and best friend) Dorothy and niece, Sharon, who live in Georgia; Polly continued close ties of over 59 years with her niece, Ann Harris and her great-niece, Beth Harris, of Kansas City, with fond memories of family holidays together; her niece, Vickie McGilvry, residing in Lone Jack, Mo., fondly remembers weekly movies dates and lunches until Polly was well into her 80s. Polly and Jack also enjoyed a 60 year relationship with their best friends Bill and Jan McCaffree, of Nevada, a relationship full of fun and respect.

She enjoyed life and was on the move well into her 80s. Many will remember Polly for her intelligence, beauty, tenacity, sacrifices, and good-natured humor. A living model of the “Greatest Generation."

Polly is layed to rest alongside her husband Jack at Deepwood Cemetery, Nevada, Mo.

Vaccinations and masks please. In lieu of flowers the family suggests contributions to Cottey College (https://donations.peointernational.org/peo-donation-cottey).