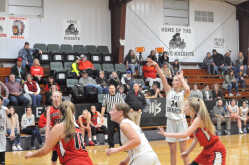 NEVC’s Knights Boys and Girls Basketball took on the Chilhowee Indians and Lady Indians on Tuesday, January 4th. Here is a quarter by quarter wrap up of tonight's two games.

Ramping it up in the first quarter, the score was 11-7 Chilhowee. The Lady Indians had #21 Haley Lankford make a three and two point shot, #20 Lexi Miller made two two pointers, and #00 Laney Owsley made a two point shot. The Lady Knights had #32 Jayden George and #15 Danni Davis make a two pointer each, #24 Liya Bailey made two free throws, and #10 Crae Hutchisons made a free throw.

Wrapping up the Girls game tonight, the final score was 36-25 Chilhowee Lady Indians. Chilhowee made 14 points in the final quarter of play, with Miller making four two point shots, Skidmore making two two pointers, and Owsley making a two pointer as well. For NEVC they scored seven in the fourth quarter. #1 Ashlee Keith made a three point shot and Hutchinson made a three and a free throw to go along with that.

Starting up in the Boys game, the score was 16-4 in the first quarter, with Chilhowee taking a dominant lead early in the game. The Indians #3 Tanner Anstine made two three point shots along with four two pointers, and #13 Asher Harness made a two pointer as well. For the Knights, #12 Johnnie Bruce and #14 Holden maus both made a two point shot.

Ending the double header tonight in the fourth quarter, the final score was 62-46 and the Chilhowee Inbdians took the win away from the NEVC Knights. The Indians made 10 points in the final quarter of play, with Astines making four two pointers and two free throws, and Hanes making two free throws as well. For the Knights, they scored 14 in the fourth quarter, wit Maus making two two pointer and a free throw, Bruce, Brown, and #22 Kane Allison all made a two point shot, and Kalna drained a three pointer too.