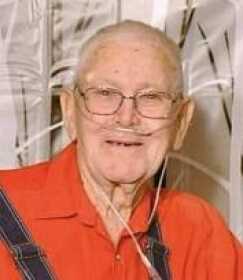 He attended Montevallo School and was raised on a farm near there. On Feb. 1, 1953, he was united in marriage to Rosemary “Rosie” Harden. They were the perfect example of a truly HAPPY MARRIAGE.

Most of his work life he spread fertilizer and lime, was the Manager at the MFA Fertilizer Plant in Nevada for 20 plus years, then drove a dump truck until he finally retired in 1994 to his cows. The last five years he and his grandson, Cory, shared the cow business. Anytime he was checking the cows, he was the driver, so he didn’t have to open the gates!

Vernon “Papaw” set the example of a devoted husband, Christian, honest and dependable man. “Papaw” was a loving, and very involved father to his children, their spouses, his grandchildren, and great-grandchildren. He was a member of the Church of Christ, Nevada, serving as a deacon for many years. He was known to call the kids when the fishing was good for a day on the river or a weekend to camp at Stockton Lake. When it was deer season, turkey season, coon season, or many other seasons, they were hunting, children, grandchildren, and great-grandchildren. If the price was right, he was buying cows or selling them. All family members have helped him move cows, feed cows, work cows, pull a new baby calf, or bottle feed one who’s momma couldn’t feed it. Nothing made him happier than to have all the family together at his house all at one time, and everyone was home for this past Christmas.

Funeral services will be held at 2 p.m., Saturday, Jan. 8, at the Church of Christ, in Nevada, with Pastor Roger Beach officiating. Interment will follow in Mt. Vernon Cemetery, Walker, Mo. Friends may call now and until the hour of service at Ferry Funeral Home in Nevada.

Memorials are suggested to Mt. Vernon Cemetery Association or Heartland Hospice in care of Ferry Funeral Home in Nevada.