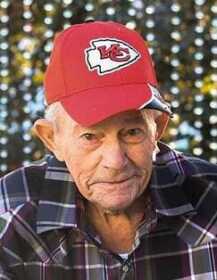 William Oscar Jackson Jr., age 87, passed away peacefully surrounded by his loved ones on Jan. 5, 2022, at Holden Manor. Bill was born on April 4, 1934, in Higginsville, Mo., to William Sr. and Grace Jackson. As a young man he met the love of his life, Donna Faye Light. They were later married on Nov. 27, 1982, and spent 26 beautiful years together.

Bill was a member of The Teamsters Union #541 for over 40 years from which he retired from. In his free time he enjoyed hunting, fishing, the casinos, chiefs football and spending time with his grandchildren. He was a devoted son, brother, husband, father, grandfather and friend who will be truly missed.

He was preceded in death by his wife, Donna; parents, William Sr. and Grace; and granddaughter, Nadaysha.

Funeral services will be held at 1 p.m., Tuesday, Jan. 11, at Ferry Funeral Home, in Nevada. Interment will following in Virgil City Cemetery, Virgil City, Mo. Visitation will be held at noon prior to the service the funeral home.

In lieu of flowers the family requests help with funeral expenses which are payable to Ferry Funeral Home.