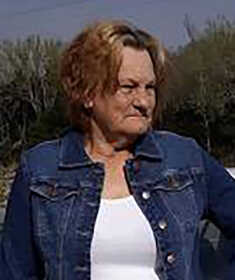 Funeral service for Rosemary Blaylock, 67, of Pocola, Okla., will be at 2 p.m., Saturday, April 2, at Chapel in Poteau, Okla., with Elmer and Jerry officiating. Burial will follow at New Hope Cemetery in Spiro, Okla., under the direction of Evans & Miller Funeral Home.

She was born on March 7, 1955, in Spiro, Okla., to Della May (Napier) and Bill Cornell and passed away on March 27, 2022, in Pocola, Okla. She was preceded in death by her sister, Jane; brothers, Henry Cornell, James Cornell, and Johnny Cornell; parents, Bill Cornell and Della May Napier; and grandparents, Tina Tincher and Diane Cornell.

She enjoyed crocheting while drinking coffee, relaxing outside with the blue birds, listening to Patsy Cline and The Judds, and spending time with family, especially her great-grandchildren.

You may leave an online message at evansandmillerfuneralhomes.com.

The family has chosen to entrust the care of the services to Evans & Miller Funeral Home, Poteau, Okla.