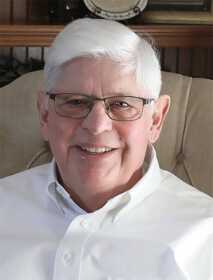 Paul graduated from Missouri State University in 1969 with a degree in Marketing. Paul loved people and talking to people, which made him a natural salesperson. Paul used those God given skills for many years in the car business.

He was united in marriage to Donna Mae Stapp on July 31, 1982, and together they raised two children, Lori Lynn and Andrew James Ames.

Paul received the Lord Jesus Christ as his personal savior after his marriage to Donna, who was instrumental in leading him to Christ. From that moment on, his faith grew, and Paul loved and served the Lord faithfully until his death.

Paul loved spending time with his family and reading and studying his Bible.

Paul was preceded in death by his parents and two brothers, Larry Ronald Ames and Gerald LeRoy Ames.

Paul will be laid to rest at Rivermonte Memorial Gardens.

In lieu of flowers, a contribution to Crossway Baptist Church would be appreciated by the family.