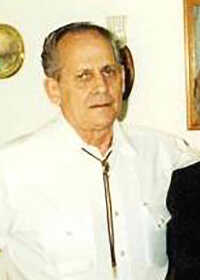 After graduation he met and later married the love of his life Patsy (Domino) Sumner on May 9, 1959. To this union four children were born: Rhonda Jean, Ron, J.D., and Darl. During his life he worked at the International Shoe Factory then retired from Fram. Throughout Tom’s life he enjoyed spending time at his cabin in Roscoe fishing on the Osage River, and also restoring old tractors. He was a man of many talents, from fabricating trailers, to building houses, to fixing hot wheels, there was nothing he couldn’t figure out, but most of all he enjoyed family. His orneriness was his best personality trait.