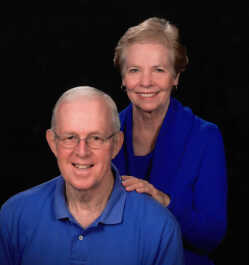 Ronald "Ron" Woody, age 75 of Webb City, Mo., passed away on April 2, 2022, at his home, surrounded by his family. He was born on Feb. 27, 1947, in Fort Scott, Kan., to James and JoAnna Woody. Ron was loved by many, and his passion for family, Christ, church family, friends and people was shown in everything he did.

Ron married Muriel on May 28, 1966, at the Pleasant View Baptist Church in Vernon County. In 1999, he achieved his Specialist Degree in Counseling at Pittsburg State University. He worked for over 29 years in social services for the State of Missouri. He also worked at First Baptist Church of Webb City as an Associate Pastor for 23 years, retiring in 2021. During Ron's time at First Baptist, he was instrumental in the creation and leadership of the Celebrate Recovery program. Ron said many times that in his jeans and a T-shirt, visiting with people at recovery houses on his motorcycle, was when he felt that he was being the hands and feet of Jesus the most.

He enjoyed bringing people to Jesus and spending time with his grandkids. During his free time, Ron enjoyed working on his farm equipment, especially a Farmall tractor, a prized family heirloom. Ron deeply appreciated and valued the relationships made with the Celebrate Recovery program at First Baptist in Webb City.

The family would like to thank all the people for the outpouring of love, time, and prayers over the last several years. They would also like to thank all who were involved in bringing the Farmall tractor back to life, so Ron could see it move under it's own power again, before he passed away.

Memorial contributions can be made to First Baptist Church of Webb City or Life Choices.

Funeral arrangements are under the personal care and direction of Simpson Funeral Home in Webb City.

The family encourages friends to visit simpsonfh.com to share memories of Ron.