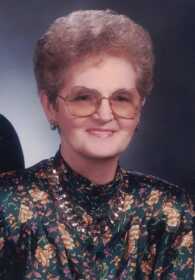 Maxine was born Dec. 27, 1929, in Richards, Mo., the daughter of Loren Blake Rinehart and Fay (Cline) Rinehart. Maxine attended Rinehart School through the eighth grade and graduated from Metz High School in 1947. She completed her education with an A.A. in accounting later in life. Maxine enjoyed playing basketball in high school and would occasionally tell a story about playing if you asked her to talk about it.

Maxine married Bob in 1948 and soon went to work at Farm and Home Savings in Nevada. She took 10 years off, beginning in 1956, when Rob was born to raise her two boys. Two years after returning to Farm and Home, Maxine and Bob opened Rob’s Western Wear on Cherry Street in Nevada. Maxine continued her work as well as helping run a business. After over 40 years of working outside the home, Maxine retired. She then tended flowers, researched genealogy, created greeting cards and kept busy being a loving Mom, Grandma and Great-Grandma.

Contributions may be made to the Alzheimer’s Association in Maxine’s memory in care of Heuser Funeral Home, 320 E Walnut, Box 42, Rich Hill, Mo.