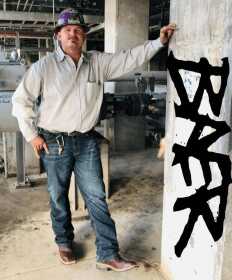 Robert James Baer, 33, of Harwood, Mo., passed away Sunday, April 24, 2022, in Alexander, N.D. Robby was born Aug. 19, 1988, in Springfield, Mo., to Robert C. Baer and Shellie D. (Peace) Baer. He met Ashley Harms in Junior High and they have been building their high school sweetheart life together ever since. They were married on April 18, 2015, at the Rinehart Christian Church.

Robby grew up in Harwood, Mo., and graduated from Northeast Vernon County with the Class of 2007. Throughout high school he worked for Harms Repair Service. After graduation he attended Spartan College of Aeronautics & Technology. His true passion was working construction and traveling for jobs throughout the United States and U.S. territories. Robbie started out as a pipe fitter and worked his way up to foreman then general foreman. He made his way up to Construction Supervisor. Above all Robby was a family man. He loved his family and friends and he never hung up the phone without saying “Love You Bye.”Robby loved to fish, hunt, and grill his “Yard Bird." Robby was also known for his “BAER HERE’ ISM’s." He loved taking his family to the beach and just spending the day with friends. Robby was a member of the Baptist Church of Harwood.

Robby is survived by his wife, Ashley, of the home; one son, Paxton Lane; two daughters, Kambrie Elise and Kinsley Marie, all of the home; his mother, Shellie Baer, of Nevada, Mo.; one brother, Joel Baer, of Harwood, Mo.; three sisters, Darci Baer of Republic, Mo., Tamara Brannon (Zach) of Hazen, N.D., and Katryna Leach (Ryan) of El Dorado Springs, Mo.; parents, Randy and Tracy Harms of Harwood, Mo.; grandparents, Darlene Peace of Nevada, Mo., and Judith (Bill) Michener of Red Oak, Texas; nieces and nephews, Zander Brannan, Hunter Leach, Bailey Brannan, Cale Brannan, Noah Baer and Abigail Baer, and numerous Aunts, Uncles, Cousins and many, many friends that were family. We can’t forget his dog Trick. His most memorable saying was “Family is who you make it.." Preceding him in death was his father, Robert C Baer; and his grandfathers, Roy K Peace and Robert J Baer.

Services for Robert Baer will be held on Saturday, April 30, at 1 p.m., at the Schell City Baptist Church with burial to follow in Lefler Cemetery under the direction of Bland-Hackleman Funeral Home. The family will receive friends from 11 a.m. to 1 p.m., the day of the service.

In lieu of flowers donations to the family can be made in care of Bland-Hackleman Funeral Home.