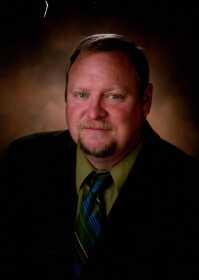 Mark was born to Paul and Ruth Koca in El Dorado Springs, Mo., and raised on the family farm. After graduating from El Dorado Springs High School, he attended CMSU in Warrensburg, Mo., earning a Bachelor of Science degree in technology education with a minor in manufacturing and construction.

He began teaching industrial technology in 1985, teaching for 21 years. He taught in several districts before returning home, teaching middle school and high school students in El Dorado Springs. During that time, he earned his Masters degree in Education Administration from William Woods University. He was honored to receive the International Technology Educators Association Teacher of the Year award in 2004, traveling to New Mexico to accept it.

In 2006, he accepted the position of high school principal at Humansville public schools, and a year later stepped into the superintendent position there. He earned his Education Specialist degree from William Woods University during this time.

In 2011, he was honored to again return to El Dorado Springs public schools, this time as superintendent. During his nine years in this position, he took pride in the many improvements made to the building and grounds. He was surprised and honored to receive the Chamber of Commerce Hall of Fame Lifetime Achievement Award in 2020. Mark retired July 1, 2020 after 35 years in public education.

Mark met the love of his life, Jennifer Knight at a church Christmas program in 1978. They were married soon after he graduated high school in May of 1981 and were blessed with two children.

Mark wore many hats: husband, father, grandpa, teacher, administrator, farmer, builder, craftsman, musician, friend, and more. Of these, the first three were his favorite. He was a lifelong learner and born teacher; his love of education was evident in all he did.

He was the rock of his family, the go-to guy. The first person called with questions on how to do something, or, more often, how to fix something. Many people have said he was the smartest person they knew, but also humble, approachable and entertaining. He truly loved learning new things, and was blessed with the ability to retain what he learned.

As you might expect, having been raised by a farmer and music teacher, he loved both of those activities. His favorite places were outside (unless it was cold) and his work shop. He had a deep love and appreciation for music and enjoyed playing trumpet throughout school and for many years in the El Dorado Springs Municipal Band.

Mark was preceded in death by his parents, Paul and Ruth Koca.

He is also survived by brothers and sisters- in- law, nieces, nephews, and cousins.

In lieu of flowers donations may be made to the Mark Koca Memorial Fund in care of Bland-Hackleman Funeral Home.