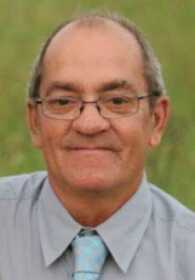 I want to tell you something.

Gary Vernon Wehmeyer loved everything mechanical and enjoyed working on cars, trucks, and heavy equipment. But even more than fixing something, Gary liked to tell stories about the things he worked on, the people he worked on them with, and the trouble they got into when they thought no one was looking. He was never without an anecdote about working late into the night to get a car ready for a race or a dozer ready for another day’s work.

He was “Gair” to his wife, Dad to a lucky few, and Grampy to many luckier still. Grampy’s favorite places to be were the hayfield, Las Vegas, anywhere his grandkids were, and his own front porch with his dog Winston. He enjoyed woodworking, fishing with the grandkids, and talking over coffee.

Gary was born June 14, 1954, in Nevada, Missouri, to Samuel and Bettie (Garfield) Wehmeyer. He was reared on a farm near Walker, Mo., and was the sixth of seven children. He attended Walker High School. He married Saundra (Erwin) Roberts on Aug. 4, 1978. Their new family included six children from prior marriages; another two children were added to the union later.

Gary worked at many different enterprises throughout his working life. He was a skilled mechanic, heavy equipment operator, and he and Saundra owned a trucking company and a residential rental company, and together ran the Clark gas station for many years.

Per his wishes, no services are planned. Instead, go sit a while on your front porch, take the grandkids to visit the lumberyard, or go to Chicken Mary’s for a good dinner. But wherever you are, tell some stories or make some new ones.