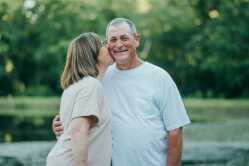 Our dad, Randy (Randall) Ray Starlin passed away on Tuesday, April 26, 2022, surrounded by his family and dearest friends.

Dad was born on May 1, 1956, at home, “on the couch” to Joe and Dona (Mann) Starlin of Sheldon, Mo. His closest sibling, Doris, was nine years older than he and his mom was 46 years old when she had him. The youngest of nine siblings and elder parents, he was notoriously spoiled and ornery. Though he was well cared for, he knew how to work hard and did throughout his life.

Dad attended school in Sheldon where he played basketball and was a pole vaulter for the track team. In the summer of 1969, he met our mom and the love of his life, Kim Peters. Mom and Dad were married on Feb. 2, 1975, and shortly after, Jesse was born. In 1977, they had Tyler and in 1980, their favorite, Aimee. Mom used to say that, “All the old bitties” in Sheldon said they would never last. They had been married 47 years when he passed.

We were raised on a small farm in rural Vernon County near Montevallo. Dad worked construction and farming all his life and was an avid hunter. He loved hunting of all kinds, but mainly “coon," deer, pheasant, and quail. He loved hunting with dogs and was known for his ability to train a hunting partner.

In 1991, Dad became the foreman of his friend, Roy Slates’, 1100-acre cattle ranch near Montevallo. He and his boys managed this huge farm and raised over 2,000 head of cattle together. He continued to raise cattle with his boys for the rest of his life.

Dad took pride in owning land. He always said, “It’s forever." While money never meant much to him, he and mom did ambitiously purchase land throughout their lives. He took comfort in knowing he was leaving something so valuable to pass on to his kids.

Above all else, dad was a family man. His kids and grandkids defined him. Every plan he made and motive in his being was made with them in mind. In his final moments, everyone was there reminding him that they felt that love and would remember it forever.

The story of Randy is incomplete without his best friend, Jim Witte. They met in the summer of 1975 at Friend’s Fest and remained partners in crime to the very end. Every childhood memory we have includes Jim, his wife Lois, and their son Matt. Dad and Jim worked together, hunted together, and raised their families together. In later years, they took up golfing and spent every beautiful day that they could on the golf course, talking smack to each other and betting on their games. When dad got sick, Jim was by his side every.single.day. When Jim said goodbye to his friend of 50 years, he said, “Go find us a place to hunt.”

Dad was preceded in death by his parents and all but one of his siblings: Harvey, Tudie, Joyce, Fran, Betty, Jim, and Shirley. In March of 2022, he also lost a great-great nephew to brain cancer, Quinton Frentrop. He was 13-years old.

Son Jesse, wife Aimee and their six kids: Tayten (Tyler) Hardy and baby Rhettlyn. Coy (Chance) Starlin and baby Chaylee (and one on the way). Kaden (Skyla Beckford) and baby Briar and Jacie, Emrie, and Renner of Milo, Mo.

And many cousins, nieces, nephews, and friends.

Randy lived within 10 miles of where he was raised his whole life. All of his family lived very close to home and spent most Sunday’s together having dinner. Randy was a great dad, friend, and grandpa and lived a good life. He will be missed by anyone lucky enough to have known him.

A Celebration of Randy’s Life will be held on Saturday, May 28, at 1 p.m., at the 3M Clubhouse, in Nevada, Mo. We would like to invite you to come and share a memory of our dad.