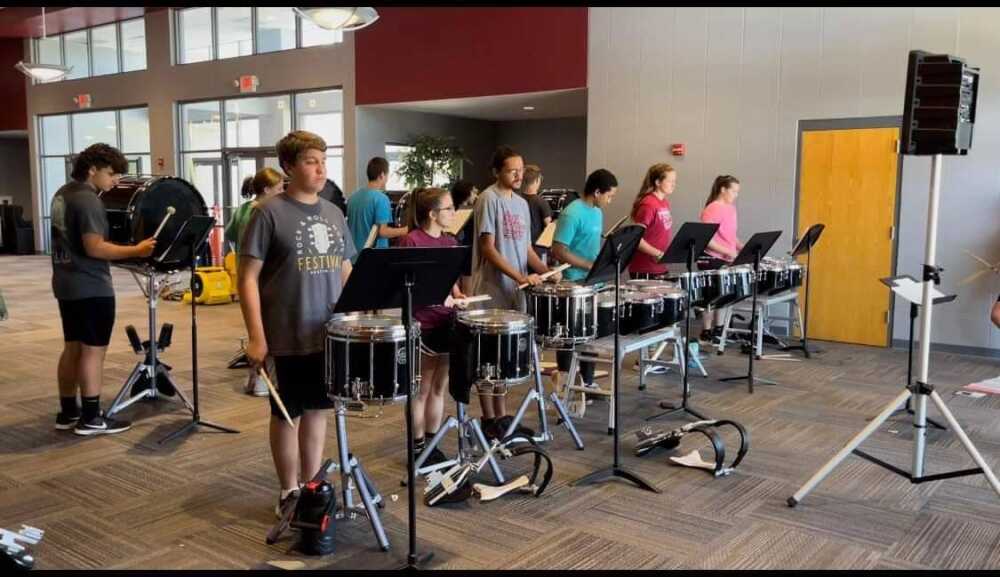 Members of Crimson Sounds practicing their music this week, in preparations for future football games and Bands of America competitions.

Nevada High School is looking forward to the new band season come August, as they will show off their new show this fall at band competitions across the state. Michael Fox, the band director for Crimson Sounds, shares some of the new things that will happen this year. “Crimson Sound is making some big changes to our competition season this year. We will be moving into the BOA (Bands of America) competition circuit. This is the highest level of competition for a high school marching band. They have regional as well as national competitions, and Crimson Sound will be attending a large festival in Bentonville, Ark., and then our big festival will be BOA Super Regionals in St. Louis. This festival will be held in the dome where the St. Louis Rams used to play. This will be a huge festival that will make some amazing music as well as some amazing memories.”

Last week started off Crimson Sounds band camp. They go over how the show will go, learn their music, and figure out what will happen this year. Fox talks about how the camp has been so far. “We have had some amazing days of camp so far. Last week we had over 60 members here representing freshman, colorguard, and percussion. They worked on music and marching basics to be ready for full camp which began on Monday July 25th. I have loved working with 107 of the best musicians around throughout the camp. This is shaping up to be an amazing season.”

This year, Crimson Sound’s show is Once Upon A Time-how to create a fairy tale, and will be performing parts of the show at home football games during halftimes, as well as several competitions. Fox talks about the show and states who some of the leaders will be in the band this year. “This is going to be a light hearted fun show that will bring a magical presentation to Logan Field as well as to competition fields all over Missouri and Arkansas. Our drum majors this year will be Jadyn Thankamoni, Blair Warland, and Kylie Ast. These leaders attended drum major camps at Parkview Drum Major Academy and Missouri State Bands Alive leadership camp. They will be a strong leadership presence on our field this fall."

Wrapping up the interview, Fox states how important everyone is to the marching band, and how everyone is family to him. “I focus on creating a family within the band. Section leaders are expected to act as a big brother or sister to them and make them feel accepted into our family. Everyone deserves a place in this band family and I encourage them to lean on leaders and staff to help make it a tight knot group. They are and will always be my kids.” Be sure to watch and attend Nevada Tiger football games at Logan Field this year to watch the game and watch the Nevada High School’s marching band, Crimson Sounds.