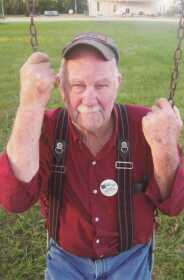 Alvin Ted (Uncle Ted-dy) Miles passed away peacefully on Friday Au-gust 5, 2022, at the But-ler Center for Rehab and Health, Butler, MO. He was recovering from Co-vid at his home in Rich Hill, MO when he had a stroke and was admitted to the facility where he received wonderful care during his brief stay. He was born to Wilburn and Dallie (Dodd) Miles on January 14, 1937, in Temple, TX. The family moved from Texas to Guthrie Oklahoma before settling in Lamar, MO where he attended school and worshiped with the Church of Christ.

He did several heroic things in his life but one of the most monumental was saving his sister Dal-lie from drowning. He joined the Marine Corp at a very young age and completed boot camp in San Diego, CA. He served about a year, was discharged, and then re-enlisted a couple of years later and was stationed at Adact, AK where he was a prison guard. He was awarded the National Defense Service Medal and qualified expert rifleman. He considered this his greatest honor be-cause he outshot everyone in his unit including his Platoon Leader.

After military service he returned home to Lamar, MO and because he was a great dancer, hand-some, and well dressed he captured the heart of Alice Ruby. They married and together they had two children in one year. Alvin worked throughout his life as a mechanic in auto, diesel, and aircraft. He was a machinist and operated ATM Machine Shop in Arcadia, KS and Rich Hill, MO. He had a brilliant, beautiful mind that enabled him to create inventions that were used on the farm and in life. His last employer was Bob Williams where he worked as a superintendent for Bob Williams Properties.

Alvin was a pilot and flew the Cessna airplane. He was a member of the VFW 0067 in Rich Hill, MO where he served on the Military Honors team. He was also a member of the Civil Air Patrol. Alvin loved to drink coffee at Pete’s, eat biscuits and gravy from the Rich Hill Café, eat breakfast at the Kern Center, which he referred to as the “old folks’ home”, and hamburgers at Swope’s. He enjoyed visiting his local friends like Joe Terry, but his truly happy place was on his brother Louie’s farm drinking coffee at his kitchen table. Ted loved a “larpin good” meal.

Alvin’s greatest love was for his children, grandchildren, and great grandchildren and spending time with them on holidays and racing stock cars at Ne-vada Speedway and he raced in the top 3 in the mechanic’s race at Humboldt KS Speedway where he finished in the top 3. He loved his fam-ily deeply but due to life’s scars he often needed to love them from afar. Sem-per Fi Alvin Ted Miles. You will be missed.

Alvin will by laying in state at Konantz Warden Funeral Home in Lamar, MO on Thursday August 11, 2022, from 9 AM to 7 PM and Friday August 12, 2022, from 9 AM to 4:30 PM. A memorial service with full military honors is planned for Saturday August 20, 2022, at sunset at Greenfield Cemetery. Please check the funeral home website or call to confirm service time.