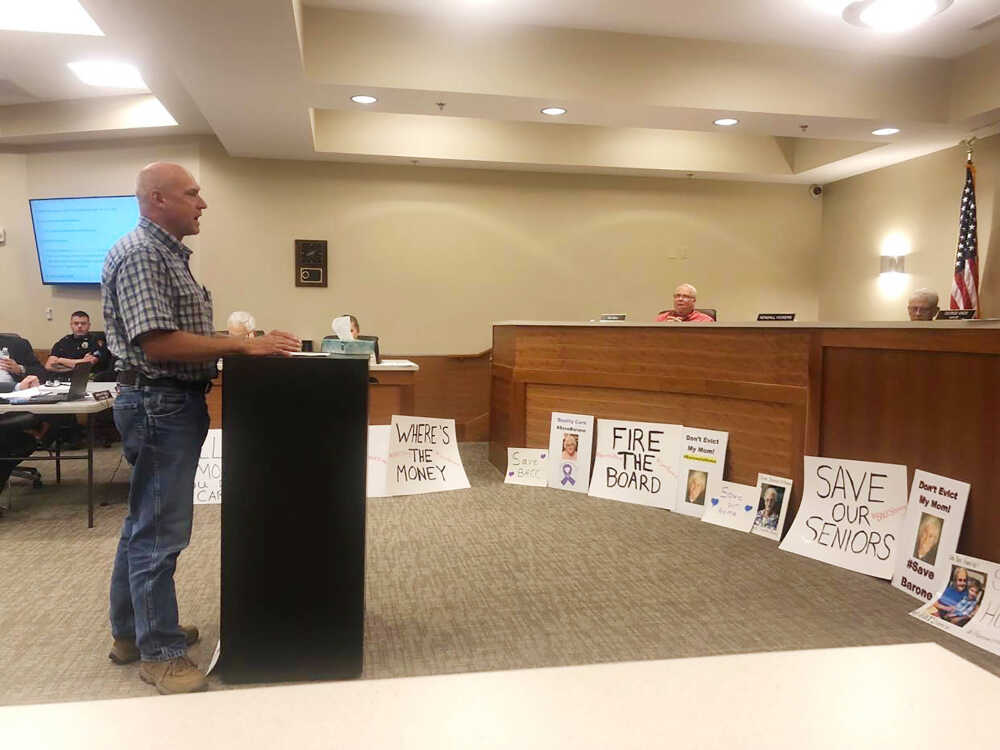 Joe Wilson speaks to the Nevada City Council Tuesday evening during a packed meeting about the future of Barone Alzheimers Care Center. Wilson, along with several others in attendance, called for the resignation of the Long-Term Care Board and its interim CEO Gene Vestal, citing lack of transparency and due diligence to complete a strategic plan.
Photo by Sarah Haney | Daily Mail Editor

The Nevada City Council met in regular session Tuesday evening with a crowded council chamber. Many community members turned out in light of the recent announcement to close the Barone Alzheimers Care Center building, and transfer residents to the Moore-Few Care Center building.

Jennifer Gundy (Executive Director of On My Own, Inc.) echoed these sentiments, while also noting a mismanagement of funds. "Back in November, we brought to light the fact that there's a lot of mismanagement in the funds with the hospital and Long-Term Care," stated Gundy. "We would not be having these discussions had Long-Term funds not been used to save the hospital."

Gundy closed her remarks by stating, "We want to call for the termination of Gene Vestal, the interim Long-Term Care CEO, and all of the members of the Long-Term Care Board. You have the power. We want the termination of Judy Campbell, Linda Douglas, Bill Kohler, Mike Parson, and Tim Wells. That needs to be done. We can start over. There are grant funds and there are ARPA (American Rescue Plan Act) funds that are available right now to save both facilities."

At the close of the public participation portion of the meeting, Mayor George Knox stated he wanted to have added to the next council meeting's agenda the motion to "withdraw the ARPA money that we previously approved for Long-Term Care until we get a competent leader and show us that they have actually talked to the people that they needed to talk to." In addition to this, Mayor Knox stated that he'd like to "make the motion at the appropriate time to call for the immediate dismissal of Mr. Vestal." This received loud applause from those in attendance.

The council continued the meeting by considering a pair of bids. The first bid (Resolution No. 1652) would authorize payment to Core & Main of Blue Springs, Mo., for 200 feet and 36 inches of corrugated plastic drainage pipe. This pipe would be for storm water improvements at Walton Park. Four bids were received and included: Core & Main (Blue Springs, Mo.) — $8,850; Steward Concrete (Nevada, Mo.) — $8,900; Schulte Supply (Independence, Mo.) — $10,083.80; and Scurlock Industries (Springfield, Mo.) — $13,640. The lowest bidder (Core & Main) was recommended to the council. This will be funded by a combination of Capital Improvement Plan (CIP) and American Rescue Plan Act (ARPA) funds.

After consideration, the council unanimously approved of Resolution No. 1652.

The next bid the council considered (Resolution No. 1654) would authorize payment to Zach Erwin Construction of Nevada, Mo., for storm water repairs in the 300 block of North Adams Street. A sink hole in the 300 block of North Adams Street has been known of for several years and continues to get worse affecting not on the right-of-way, but also the street. The replacement pipe was approved by city council on Feb. 15, 2022, by Resolution No. 1614 from Scurlock Industry for $14,698.13. Bids were recently solicited for the replacement of the galvanized storm tube with 38" by 60" Horizontal Elliptical Concrete Culvert Pipe. This pipe was chosen due to the small profile to allow for the repair of the sanitary sewer line that runs parallel with this storm drain.

In unfinished business, the council continued its conversation regarding the transfer of the Nevada City Municipal Court to the Vernon County Circuit Court Associate Division (Bill No. 2022-064). With a motion, a second, and a unanimous roll call vote, the council approved the bill.

With no old business items, the council continued its meeting with new business items. The first item considered (Bill No. 2022-065) was a special ordinance that would authorize the execution of an agreement with Anderson Engineering, Inc. of Joplin, Mo., for miscellaneous engineering services. With a motion, a second, and a unanimous roll call vote, the council placed the bill on first reading.

For more in-depth coverage of the remainder of the city council meeting and new business items, see the Friday edition of the Nevada Daily Mail.