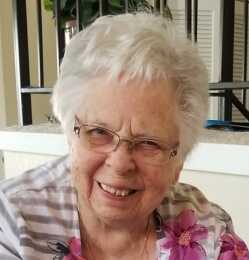 Charlotte Ellen (Siegismund) Hirni age 99, formerly of Nevada, Mo., passed away in Albuquerque, N.M., on June 29, 2022, surrounded by her family.

Charlotte was born at her family farm home in Rockville, Mo., on Nov. 1, 1922. She always pointed out that she was born on All Saints Day.

She was born to Myrtle (Russell) Siegismund and Walter H. Siegismund who preceded her in death.

She was married to Harold E Hirni from December of 1945 until his passing in October of 2005 in Nevada, Mo.

Soon after their wedding, Harold and Charlotte moved to Adrian, Mo. Harold and his cousin Bill Gench then established the Hirni & Gench Hardware and ran it as partners until the store was sold. Charlotte and Bill’s wife, Betty, served as the store’s bookkeepers. Charlotte and Harold retired after selling the store in 1977. They spent winters in Texas until Harold passed in 2005.

Charlotte later moved her winter home to Mesa, Ariz., to be with her daughter Charlene and her husband John Flynn.

Charlotte, Charlene, and John lived happily together as a family for 18 years. During that time Charlotte and Charlene took the trips that they never had time to take while they were working.

They toured Switzerland and northern Italy, took a Danube River cruise, then a Mediterranean cruise with a much anticipated tour of the Holy Land, followed by riding a camel the following day (at age 89) at the pyramids! Later, she took cruises closer to home through the Panama Canal, Alaska’s Inner Passage, and a New England cruise where the ship docked in Bar Harbor, Maine. Here, her daughter and niece had arranged for a city proclamation to be presented to recognize that day when Charlotte E. Hirni had finally visited all 50 states – Maine being the final one! Years before she had taken her mother on a New England bus trip, but her mother got sick and had to return home to Missouri, thus missing the opportunity to visit Maine.

Charlotte served on many committees of the United Methodist Church in Adrian, and was on the Adrian RIII School Board . She was a substitute teacher, a founding member of the Rollin’ Bobbins Extension Club, a 50-year member of Order of Eastern Star, in the Rebecca’s, and the aforementioned bookkeeper for Hirni and Gench Hardware. But mostly she was a great wife and Mom.

She was preceded in death by her parents; her husband, Harold; and two brothers, Russell Dale Siegismund and Charles Richard Siegismund. She is survived by her daughter, Charlene Flynn (John), of Albuquerque, N.M.; grandson, Michael Flynn of Kansas City, Mo.; granddaughter, Trudi Flynn of Belmont, N.C.; great-grandsons, Jameson Malo and Parker Malo of Belmont, N.C.; and many nieces and nephews.

Memorial services will be held at 11 a.m., Saturday, Sept. 10, at Ferry Funeral Home, in Nevada. Contributions to the Hospice organization which serves your area, or the Legacy Hospice in Albuquerque are suggested. View obituary and send condolences online at www.ferryfuneralhome.com.