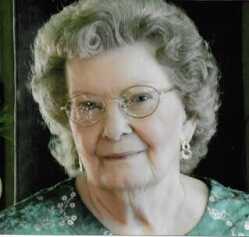 Ruby came to Vernon County at a young age with her family and settled on a small farm east of Milo. She attended school in El Dorado Springs. For most of her life she was a homemaker but also worked at several different places for a short time, including Nelly Don, Gibsons in Nevada, Nevada State Hospital, and was also an Avon Lady. Ruby was a talented seamstress and made clothing for her children. Some of her hobbies included painting, and gardening. Ruby was a longtime member of the Milo Baptist Church, a 65-year member of the Nevada Chapter Order of the Eastern Star where she was a Past Matron and former District Deputy Grand Matron.

Funeral services will be held at 1:30 p.m., Tuesday, Sept. 27, at Ferry Funeral Home, in Nevada, with Lorne Brown officiating. Interment will follow in Milo Cemetery. The family will receive friends from 5 to 7 p.m., Monday, at the funeral home.

Memorials are suggested in her memory to Milo Baptist Church or the Milo Cemetery in care of Ferry Funeral Home.