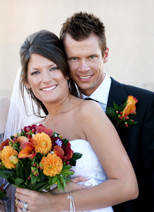 The Loretto in Westport, with its magnificent stained glass and historical chapel, served as the venue for the wedding ceremony of Carrie Jo Anderson and Brandon King. The double ring service was held on Oct. 3, 2008.

A mix of fall-colored dahlias, calla lilies and hypercium berries adorned the wedding party, including the bride's wedding bouquet. Seven bridesmaids, five groomsmen and three special attendants served at the pleasure of the bride, who wore a white, strapless, mermaid-style dress with intricate crystal and pearl beading at the top, with additional beading along the chapel-length train.

Mrs. King is the daughter of June Johnson and granddaughter of Carrie Loomer of Nevada. Mr. King is the son of Donna King and Melvin King of Independence, Mo. The bride was given in marriage by her uncle, Ken Loomer, Nevada.