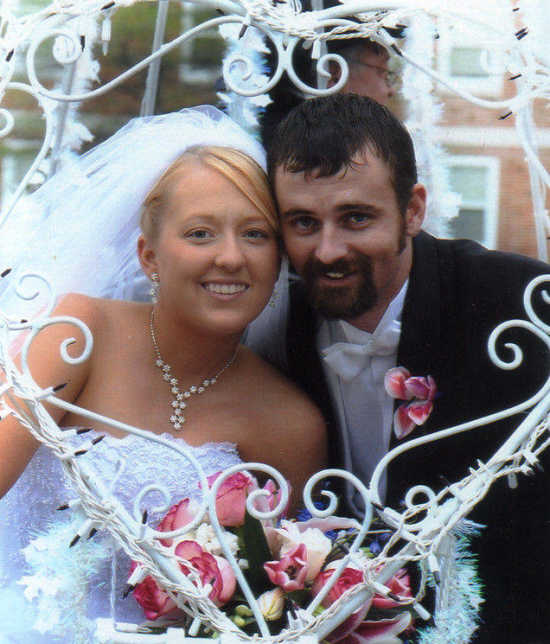 The historic Cottey College Chapel in Nevada, Mo., was the setting for the fairy tale wedding of Courtney Charlene Hinkle and Blake Landon Baker, on May 2, 2009.

The marriage celebration took place at the Cottey Chapel sanctuary and was decorated with pink stargazer lilies, white roses, green ivy, and white bows with pearls at the ends of the chapel pews. Dťcor also included four large candelabra floral arrangements with pink stargazer lilies, white roses, and green ivy, 12 bouquets of draped white tulle and two large bouquets and stands with the same flower arrangements that were seen throughout the event.

The ceremony was conducted by the Rev. Jim Davis. The bride is the daughter of Kenny and Janyce Hinkle of Nevada. The groom is the son of Dennis and Sherry Baker, also of Nevada.

Presented in marriage by her father, the bride wore a white strapless gown with lace and crystals adorning the bodice. The skirt of the dress consisted of tucks in the fabric with embellishments on the tucks of lilies and a cathedral-length train and a tiered matching veil. The bride also wore watermelon satin shoes and a crystal and pearl lily pin in her hair to accent her for her special day. Her necklace and earrings were a gift from the groom, which matched the embellishments of the dress. She carried a full bouquet of pink stargazer lilies, blue cornflowers and white roses.

The bridal party consisted of maid of honor Kendra Hughes, friend of the bride, bridesmaid Jenny Collins, sister of the groom, and bridesmaid Kacy Milich, friend of the bride. The flower girl was Keilah Cain, cousin of the bride. The bride's attendants wore full-length strapless dresses in watermelon satin with tucks in the fabric of the skirt of the dress to match the bride's gown and give the wedding a true look of the fairy tale theme. The flower girl wore a custom designed dress, which matched the bridesmaids'. The bridesmaids displayed matching diamond necklaces and earrings with white satin shoes, opposite of the bride. They carried bouquets of pink stargazer lilies, blue cornflowers and white roses hand-tied with cornflower blue ribbons. The flower girl carried a white lace basket with strands of white pearls filled with pink and white rose petals and also wore jewelry, that matched the bridesmaids', and a tiara.

The groom's best man was Justin Zoglmann, a friend of the groom, groomsmen Zach Mclnroy friend of groom, and Trevor Hinkle, brother of the bride. Ringbearers included Dillon and Trey Collins, nephews of the groom. Ushers were Tyson Rainey, cousin of bride, and Aaron Mclnroy, friend of the groom, and the guestbook attendant was Kieran Cain, cousin of the bride. The men all wore black tuxedos with a soft pink tulip boutonniere. The men also sported socks with their wedding role embroidered on them. A bubble machine and noise makers greeted the couple as they left in a Cinderella carriage.

The reception was held at the 3M Clubhouse in Nevada. Cocktails were served by Mr. and Mrs. Hale. Each table held edible fruit bouquets which served as hors d'oeuvres. The head table was decorated with a satin canopy, colored crystals, pink tulle, and candlelight. A miniature head table was created for ring bearers and flower girl.

Dinner was catered by the Rib Crib restaurant. Each table was set with the edible fruit bouquet, mirrors, candles, crystals, and favors that followed the fairy tale theme.

A sweet bar was also displayed in the reception hall that consisted of a large variety of sweets, fruit, chocolate and punch fountains, nuts and mints. The cake was four tiers with white and chocolate layers. The cake was created with white and pink fondant icing, handmade fondant stargazer lilies. A crystal Cinderella carriage was placed between the second and third layers of the cake. The wedding topper was a porcelain figurine of Cinderella and Prince Charming and the cake was adorned with the words: "happily ever after." Cake and gift attendants included: Deanna Rainey, Cindy Bean, Kathi Jo Cain, and Brenda Cox.

Pre-wedding events included a bridal shower in Nevada on April 25, 2009, hosted by the bridesmaids: Kendra Hughes, Jenny Collins, and Kacy Milich. A rehearsal dinner was held by the groom's family on May 1, 2009.