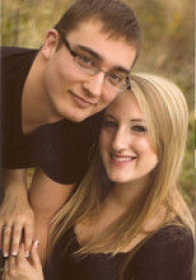 Katie is a 2007 graduate of Prairie View High School and will graduate from Pittsburg State University in 2011 with a degree in elementary education. She is the granddaughter of the late George Aikman and Pat Aikman, Pittsburg, Kan., the late Rolland E Wilson and Maxine Wilson, Fort Scott, and the late Danna Wilson.

Tylor is a 2005 graduate of Prairie View High School and a 2009 graduate of Pittsburg State University with a degree in communications with emphasis in advertising and marketing. He is currently employed by PlattForm Advertising in Lenexa, Kan. He is the grandson of John and Connie McGinnis, LaCygne, Kan., and Darlene Meis, Olathe, Kan.

The couple plan to be married on June 26, 2010, at Christ Community Church in Leawood, Kan.