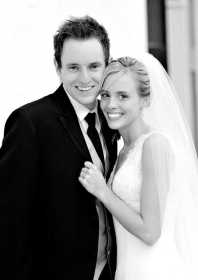 Kristen Koester and Drew Williams were married at The Historic Lyons Twin Mansion in Fort Scott, Kan., on Nov. 9, 2009. The intimate ceremony was officiated by pastor Steve Williams, father of the groom.

The bride was escorted down the aisle by her father and given in marriage by her parents. She wore an ivory couture gown with a V-neck empire waist of delicate lace and a fitted A-line satin skirt adorned with Swarovski crystal buttons down the chapel-length train, accented with a chapel-length veil. Her hand-tied bouquet of ivory roses, dahlias, button mums and hydrangeas was accented with assorted succulents, seeded eucalyptus, silver kale, winterberries, and green artichokes.

The bridesmaids were Tara Allen, sister of the bride, Fort Scott, and Angela Ober, friend of the bride, Beaverton, Ore. They wore knee-length smoky teal silk dresses and carried bouquets similar to the bride with notes of blush and copper pink. Their pearl necklaces of blush pink, ivory and light gray were gifts from the bride.

The groomsmen were Matt Williams, brother of the groom, Albuquerque, and Johnny Michieli, friend of the groom, Dallas, Texas. They wore black tuxedos with graphite gray vests and black ties.

Music for the ceremony was provided by Johnny Michieli, soloist and guitarist. The ceremony was decorated with ivory pillar candles and votives, vintage press letters, and organic garden urns. Following the ceremony, a dessert reception was held at the Twin Mansion.

After honeymooning in Ochos Rios, Jamaica, the couple reside in Albuquerque.