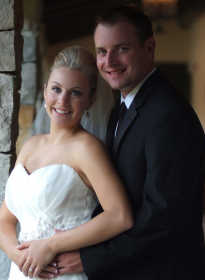 The bride is the daughter of Bob and Cindy Thompson of Kansas City. Her groom is the son of Mr. and Mrs. Allen Hoover, of El Dorado Springs, Mo., and Mr. and Mrs. Bill Jones, of Greensboro, N.C.

Justin is the grandson of Mr. Gene Hoover, of El Dorado Springs, Mo., and the late Mrs. Sandy Hoover, and Mrs. Char DeBoutez, of Nevada, and the late Mr. Frank DeBoutez.

The rehearsal dinner was held in the home of the Thompsons and hosted by the groom's parents. Indian Hills Country Club was the site of the reception, which was hosted by the bride's parents.