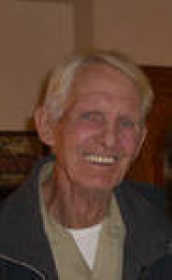 John lived in New Jersey and Massachusetts in his earlier years. He served in the U.S. Navy for four years and then in the U.S. Air Force for six years. He traveled all over the world through the service, and met Ellie, whose father was in the Air Force, in French Morocco, Africa. They were married in New York City. All eight of their children were born in Massachusetts. In 1971, he moved his family from Massachusetts to southern Oregon.

He made his living primarily as a carpenter, but also worked as a police officer, a hospital orderly and he was a licensed cosmetologist. He became disabled in 1975 following gastric cancer that resulted in the removal of three-fourths of his stomach. Following the death of son, Scott, John and Ellie moved to Nevada, Mo., in 1999.

At home, John always enjoyed reading a good book. Throughout his life he enjoyed golf, bowling, dancing and hunting. He was an avid fisherman of salmon on the Rogue River in Oregon. He also crafted handmade fishing poles and lures. He loved to bake and his specialties included cheesecake and creampuffs.

Hardly ever still for long, John loved to ride his Harley motorcycle and go where the road took him. Through the years, he would often take to the road to visit his family around the country, especially when they needed help with home improvement projects. He was meticulous in his work and it had to be his way or not at all!

In Nevada, John worked part time at City Hall and the Housing Authority to keep busy. He was a familiar figure around town in his green truck. John was strong and, with the grace of God, defied many odds to live into his 80s.

A memorial service will be held at 6 p.m., Monday, Nov. 22, at the First Presbyterian Church of Nevada, 500 N. Olive, with the Rev. Greg Ferree officiating. For those who wish, contributions are suggested to a newly formed fund at the Moore-Few Care Center for the purchase of a blanket warmer c/o Ferry Funeral Home, 301 S Washington, Nevada. Burial will be in Logan, Utah, alongside his wife and son.