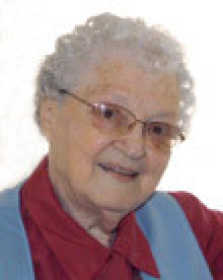 Anna graduated from Glenville High School and worked for the U.S. General Accounting Office for four years. She studied voice and accordion and sang in various church choirs from the age of 16. She married Norman L. Shaw on Nov. 22, 1947, and was active in the First United Methodist Church Choir in Fort Scott for 22 years.

Anna received her Eastern Star 50 pin from Amsterdam Lodge. Earlier, she was active in the P.T.A. and American Legion, Hume, Mo. Her interests were her family, church, and sewing which included making blankets, baby, and maternity clothes for the Beacon. Other interests included fishing and travel in retirement.

The Rev. Paul Babcock will conduct funeral services at 1:30 p.m., Monday, in the Cheney Witt Chapel. Burial will follow in U.S. National Cemetery. The family will receive friends from 12:30 p.m. until service time at the funeral home.

Memorials are suggested to the First United Methodist Church or the Beacon and may be sent to Cheney Witt Chapel, P.O. Box 347, Fort Scott, KS 66701.