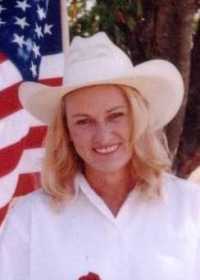 Becky was born Jan. 3, 1955, at Fort Scott, Kan., to Buzz and Juanita (Davis) Sinn. She graduated from Nevada High School in 1973 and earned a bachelor's degree from Missouri Southern in 1986. After substitute teaching at several area schools, Becky began a career with Lamar R-1 schools that spanned more than 20 years. Her love of the outdoors was expressed through hunting, fishing, and gardening. She was also a talented seamstress who enjoyed hand-work and crochet. Becky's greatest joy was her family, especially her grandchildren. She was a member of Iantha United Methodist Church.

In January 1974, Becky married Kenneth Marti, and to this union two daughters, Kenya and Jennifer were born. On Sept. 29, 2001, at the Blaser family farm, Becky married Randy "Brillo" Blaser and he preceded her in death April 28, 2009. She was also preceded in death by her father, Buzz Sinn.

Funeral services will be held at 10 a.m., Saturday, July 23, at Daniel Funeral Home where the family will receive friends from 6 until 7 p.m., Friday. Burial will be in Brillo Hill Cemetery, northeast of Lamar.

Memorial contributions are suggested to the Houston Ground Angels in care of Daniel Funeral Home.

Condolences may be sent at www.danielfuneralhome. net